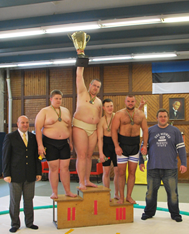 Sumo is the national sport of Japan. It has a history of a couple of thousand years and was originally connected to sacred rituals. Nowadays sumo is a sport that is exciting to watch and entertaining to all. Sumo practice in Estonia started in 1994, since then Estonian men and women have also participated in European and world championships and won many medals. Estonia was one of the founding members of the European Sumo Union in 1995. Several important sumo competitions have taken place in Estonia - in 1999 the European Championships, in 2006 the Junior World Championships and in 2008 the World Championships.

The most famous Estonian sumo wrestler is Kaido Höövelson aka Baruto, who started judo and sumo trainings in 2000 in Sports Club Sakura, in Vinni Sports Center.  In 2004 Baruto debuted in professional sumo in Japan. During his career of ten years he reached the Ozeki title. On February 8th, 2014 he ended his career with the festive top-knot cutting ceremony.

Aikido was created by Morihei Ueshiba (1883-1969) who was inspired by traditional Japanese martial arts. Aikido can be translated as „The way of the spirit in harmony“. Although a martial art, the foremost goal of aikido is promoting harmony and peace. In aikido there are several throwing and joint locking techniques, but with each technique it is important to respect your partner and move in unison.

Eesti Aikidoliit (Estonian Aikido Federation) was founded in 2006. At the moment the organization has 11 aikido clubs as members from all over Estonia, with approximately 250 aikido practitioners all together. Eesti Aikidoliit unites groups that follow aikido principles and helps members to promote aikido. Eesti Aikidoliit supports aikido teachers and confers with the Estonian Olympic Committee in the matter of teacher/trainer certificates. There is also an exam committee that has the right to assign grades.

The history of Iaido in Estonia started in the middle of the 1990’s when Jukka Helminen Sensei from Finland gave demonstrations in aikido seminars and also gave a few trainings. In autumn 2000 Rein Paluoja started learning Iaido through Jukka Helminen Sensei. From autumn 2001 he started teaching Iaido in a group that later fromed the Budo Club Mitsubachi, which together with Karate Club Wado and Hontai Yoshin Ryu Jujutsu Club forms the Martial Arts Club Budokan.

The NPO Estonian Iaido Federation was established on 20.09.2004 with members of 1 club and 2 individuals. At the moment there are ongoing negotiations with 3 clubs to join the federation. Main goals of the organization are introducing and promoting Iaido principles in Estonia and creating good conditions for practicing Iaido in Estonia and promoting Japanese culture and traditional martial arts in Estonia.

Japanese sword fighting called kendo (using a bamboo sword called shinai) has been practiced in Estonia since 2001. Regular trainings take place in Tallinn and Tartu. Despite being a full-contact sport, practicing and competing in kendo is very safe and suitable for men and women in all ages. Kendo is still a very traditional sport that has changed fairly little. By practicing kendo one can also learn a lot about Japanese culture in a broader sense. 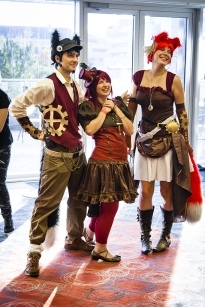 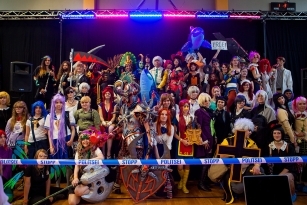 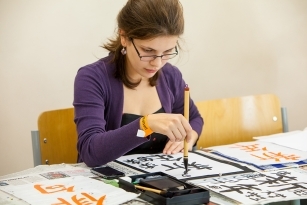 The club first started in 2005 under the name of Tartu Animeclub Asashio with the purpose of organizing the first anime festival in Estonia. After the first event in 2007 with around 75 visitors, AniMatsuri hosted 950 visitors in 2017. The Japanese pop culture oriented festival holds a number of lectures, workshops, martial arts demonstrations, competitions, gaming events and more.

Since 2016 Asashio also organizes Japan Month, which is a complementary festival to AniMatsuri with a wider focus on Japan. As with the festival, there are different lectures, workshops, presentations, movie- and gaming nights, concerts and more. In addition to these two events over the years Asashio has organized different standalone smaller events (presentations, meetups, parties, workshops, gaming events etc). A hanami picnic under Tartu’s cherry blossom trees has become a yearly tradition. In addition, the club also helps other organizers with Japanese themed events.

JAFF has been held since and during these years the festival has grown and become a remarkable part of Tallinn’s cultural events. Films by world famous Japanese directors have been featured at the festival every year and film directors from Japan have visited Estonia to talk about their films to the audience during JAFF. 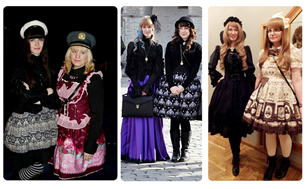 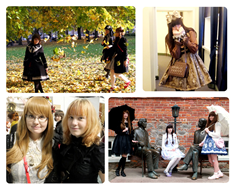 The Community of Estonian Lolitas started in 2009 in the social media outlet Orkut. The first gathering was in September of the same year.  Through the years there have been many gatherings. Nowadays members meet up once a month to visit exhibitions, opera, ballet etc. together. 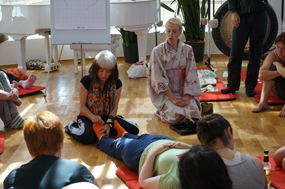 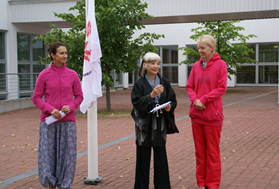 Shindo method consists of stretching and relaxing exercises together with massage. The method was created by Ms. Kazuko Kuratomi to help her prematurely born daughter with health problems. She visits Estonia every year to share her experiences, but also to be inspired.