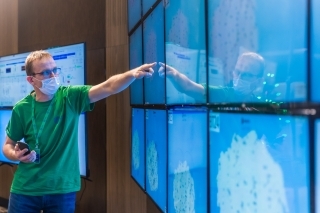 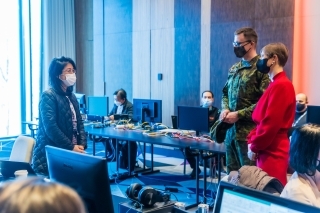 President Kaljulaid and CCDCOE Law Researcher, Keiko Kono
On 15th April, Ambassador KITAOKA attended the virtual tour to NATO’s Cyber Defence Exercise “Locked Shields”, which is conducted by “NATO CCDCOE (Cooperative Cyber Defence Centre of Excellence)”, headquartered in Tallinn, the capital of Estonia.
This was materialized by kind invitation from Colonel Jaak TARIEN, the Director of “NATO CCDCOE”.
Mr. Tomotaka YOSHIMURA, a First Secretary in charge of general and political affairs at the Japanese Embassy, also attended.
This international exercise is the world’s largest for cyber defence, which is conducted between the Red Team (attackers) and the Blue Team (defenders).
It has been held in spring every year since 2010, but it had to be cancelled last year due to COIVID19.
However, from 13th to 16th April this year, it has been recovered by using web, with the participation of more than 2,000 cyber security experts from 30 nations.
The virtual tour of “Locked Shields”, which has been continuously evolving to cope with the emerging new threats, gave a precious occasion to the Ambassador KITAOKA to witness the forefront of the cyber security.
Ambassador would like to express his sincere gratitude to “NATO CCDCOE” headed by Colonel TARIEN!