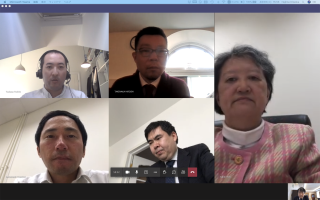 On-line meeting with Enterprise Estonia
On 6th April, Ambassador KITAOKA had an on-line meeting with “Enterprise Estonia”, which belongs to the Ministry of Economy and Communication, in charge of promoting Estonian export, foreign investment, and tourism, to promote the business relationship further between Estonia and Japan.
From “Enterprise Estonia”, Mr. Tsubasa YOSHITO, a Project Manager in Asia Trade Agency, and also JETRO correspondent in charge of Baltic 3 countries, attended.
From the Japanese Embassy, Ms. Yuki SAKAI, Counsellor, Mr. Tomotaka YOSIMURA, a First Secretary in charge of general and political affairs, Mr. Tomoya SHIGENARI, a Second Secretary in charge of economic affairs and Mr. Hiroshi TAKENAKA, Researcher, also attended.

Ambassador has been cooperating with “Enterprise Estonia”, headed by Mr. Peeter RAUDSEPP, Chairman, on various occasions including the official visit to Japan in February last year by Mr. Jüri RATAS, Prime Minister at that time, to promote the bilateral relationship.
Due to COVID19, a meeting this time was held on-line.

Mr. YOSHITO briefed the recent reorganizations of “Enterprise Estonia” together with the introduction of webinars scheduled to be held in near future.
It was followed by the exchanges of opinions on how to promote the bilateral business relationship further.
Ambassador said, “even after the reorganizations or personnel movements, I wish to continue the existing close relationship between “Enterprise Estonia” and the Embassy”.

Those who are interested in the trade, investment and tourism between Estonia and Japan are welcome to attend the following webinars by “Enterprise Estonia”:

for the Estonians;
B2C Brands, how to enter the Japanese Market? (13th April）