Ambassador KITAOKA made his 5th official visit to Viljandi City (1st Instalment: Meeting with the Mayor) 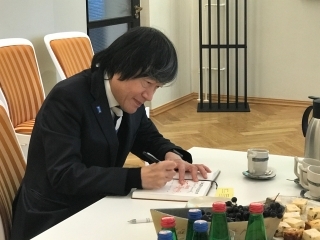 Signing on a guest book 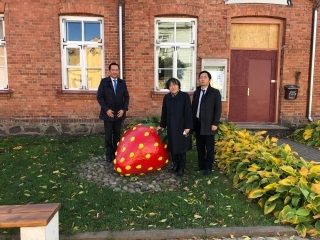 The sculpture of a huge strawberry, inspired by KONDAS’ painting
On 6th October, Ambassador Hajime KITAOKA made his 5th official visit to Viljandi City, known as “Culture City”, located in the Southern Estonia.
He was escorted by Mr. Tomoya SHIGENARI, a Second Secretary in charge of economic affairs in the Japanese Embassy.

The Ambassador left Tallinn, the Capital City, early in the morning, and arrived at the Viljandhi Municipal Office after two hours and twenty minutes‘ drive.
He was welcomed by Ms. Mari MOORATS, in charge of the international relationship.
After finishing signing on a guest book, he was guided into the office of the Mayor, Mr. Madis TIMPSON.
The meeting with the Mayor started with his power point presentation to introduce Viljandi City.
With the 6th largest population among the Estonian cities, Viljandi City has been focusing particularly on education and culture.
The first state gymnasium, whose number is increasing now in Estonia, was set up here in this city.
A precious episode was introduced. that the original idea of the state gymnasium was created by Viljandi City, which proposed it to the Central Government, and the idea got materialized.
And Paul KONDAS, a master of Naïve Art, created so many master pieces in Viljandi City (after this meeting, the Ambassador had a chance to encounter the sculpture of a huge strawberry, inspired by KONDAS’ painting).
Viljandi City has impressed the Ambassador!
This City, putting so much emphasis on the maintaining of the Estonian tradition with the Culture Academy of Tartu University, it has been also promoting the city projects for the future like the constructions of the spa-hotel or the football hall enthusiastically.
In the meeting with the Mayor, the possibility of the exchanges between a Japanese city and Viljandi City, which has already concluded sister city agreements with nine cities abroad.
It was also discussed to explore local enterprises, which have a potential to enter into the Japanese market.
The meeting finished with a photo session in such a friendly manner.
The Ambassador would like to express his sincerest gratitude to the Mayor for sparing his precious time, when he was so busy with the coming local election (17th October) ! 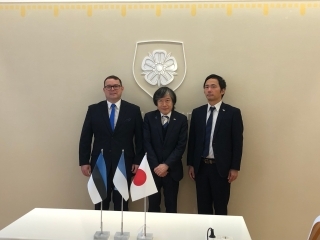 A photo session with the Mayor