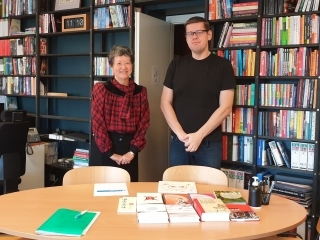 Together with Mr. Vahter, editor in chief
On September 14, Counsellor Ms. Yuki SAKAI (Deputy Head of Mission), accompanied by Ms. Olga TSVETKOVA, a staff member of the Embassy, visited “Tänapäev”, an Estonian publisher located in Tallinn, to meet Mr. Tauno VAHTER, the editor in chief.
“Tänapäev” is one of the three biggest publishers of Japanese books in Estonia, alongside “Varrak” and “Tallinn University Press”. “Tänapäev” has also published the most Japanese books in Estonia in the last few years and is normally publishing 3-4 Japanese books a year.
Their selection of genres and authors is remarkably diverse. They started from publishing Japanese classics, such as the collection of haiku translated by Professor Rein RAUD, then moved to fiction, history books and lifestyle books.
The lifestyle books by Japanese authors proved to be very popular among Estonian public with over 5000 copies of the books by a Japanese author Marie KONDO published. In the genre of fiction, they have published such Japanese authors as Sayaka MURATA in “The Red Book” series, the most prominent series featuring Oscar WILDE, Kurt VONNEGUT and many others, and Keigo HIGASHINO, one of the Ambassador KITAOKA’s favourite mystery novelists.
According to Mr. VAHTER, who is himself a translator, the reason for the popularity of Japanese culture in Estonia is that it feels familiar and exotic at the same time. Mr. VAHTER’s own interest started from books and films and he has also visited Japan.
The publisher is planning to continue working on Japanese books in the future, including children’s books, history books and fiction.

The Counsellor would like to express her sincerest gratitude to Mr. VAHTER for welcoming her in such a cordial manner under COVID19!