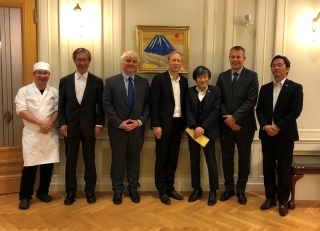 Logo of Eesti Energia
On 10th September, Ambassador KITAOKA invited to his residence Mr. Raine PAJO, a Board Member of “Eesti Energia” and enjoyed conversations over dinner.

The meeting started with the Ambassador’s power point presentation, entitled “What is Japan? Island Country, so mysterious”.
It was followed by authentic Japanese dinner, cooked by Mr. Takaaki ARAI, the official chef of the Ambassador, and all the participants exchanged their views extensively on the energy situation or the electricity situation in Estonia and in the three Baltic countries.

Actually, Ambassador KITAOKA already had a meeting with Mr. PAJO in Narva-Jõesuu, located at the Eastern Estonia bordering Russia on 15th July (see our HP and FB on that date), when Ambassador was so much impressed by Mr. PAJO’s briefing.
This has led to the Ambassador’s invitation to Mr. PAJO to the residence this time.
The dinner this time has come to be another precious occasion for Ambassador to learn further from the opinions of Mr. PAJO and two Heads of “Eesti Energia”.