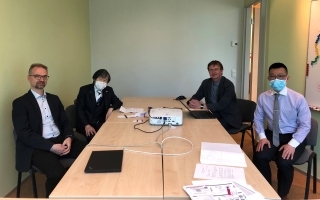 Meeting with Prof. ROSS (right) and Mr. METSALLIK (left)
On 1st June, Ambassador KITAOKA visited “Tallinn University of Technology, eMedLab”, which is the biggest education and research center in Estonia on “e-health”.
The Ambassador, escorted by Mr. Hiroshi TAKENAKA, Researcher, got detailed briefings from Prof. Peeter ROSS, the Director of the center, and Mr. Janek METSALLIK, an Expert of “e-health”, who contributed to the export of “X road”, the basis of data-exchanges in Estonia, to Finland.
The briefing was given on the activities of the eMedLab, the Estonian strategy on “e-health” system, and so on.

Prof. ROSS introduced that the actual cooperation has already been made between Japan and Estonia, not only on a bilateral basis, but also targeting the third countries.
It was followed by the lively discussions, which were so much wide-ranged, starting from the possibility of materializing “e-health” system without giving “digital ID” to each population.
The trials and errors, which Estonia has experienced in proliferating “e-health” system among its population, and the comparison between the Estonian system and those of the other countries were also discussed.

This visit to eMedLab, following the visit to TEHIK on 28th May, was not only very interesting, but also useful for thinking about the future of the Japanese medical system, both for the Ambassador and Mr. TAKENAKA, who is a medical doctor.
The Ambassador would like to express his deep gratitude to Prof. ROSS and Mr. METSALLIK, for accepting him under the COVID19!