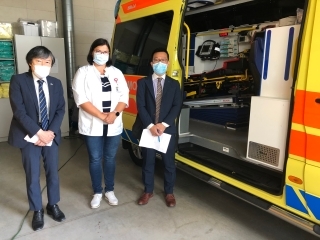 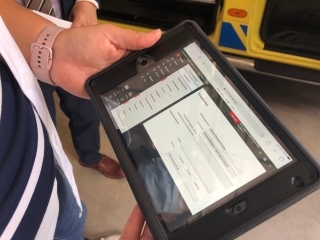 e-Ambulance software
On 10th August, Ambassador Hajime KITAOKA visited the Emergency Ambulance Center of the North Estonian Hospital, which is the largest Estonian hospital, located in Tallinn, the Capital City.
The Ambassador was escorted by Dr. Hiroshi TAKENAKA, Researcher and a medical doctor as well.
The purpose of the Ambassador’s visit is to familiarize himself with the “e-Ambulance”, which is the most modern emergency medical system, developed and introduced by Estonia in 2014, on the spot, where the system is actually working.

The Ambassador and Dr. TAKENAKA were welcomed by Dr. Lilian LÄÄTS, the Head of the Center and the President of the Estonia Ambulance Association, who conducted a guided tour into the Center.

The purpose of the “e-Ambulance” system is to connect remote areas and big hospitals to transport patients urgently, and to enable the swift and proper medical treatments at hospitals just after their arrivals.
The system starts with telephone calls from the patients’ side, and the patients are classified into one of three categories of green, yellow and red based on their urgency (triage).
A doctor or a nurse, accompanying the patient in ambulance, chooses the hospital for the patient to be transported by using software “e-Ambulance” installed in i-Pad.
On the screen of the chosen hospital, the data of the patient is displayed together with one of those three colors, green, yellow and red, and the hospital starts preparing for the acceptance of the patient.
On another screen of the same hospital, vital signs of the patient, transmitted from the ambulance and continuously changing on a real time basis, are shown.
During the Ambassador’s visit, one patient was being transported from the Central Hospital of Saaremaa Island to the North Estonian Hospital by an ambulance which is onboard a ferry heading to the main land.
The Ambassador and Dr. TAKENAKA talked on phone with a doctor in that ambulance, who said the ferry is arriving at the main land in 10 minutes.
On the side of the mainland, another ambulance is standing by to pick up the patient and to transport him swiftly to the North Estonian Hospital.
On the side of the Hospital, a place for the coming patient is secured, fully ready to start the medical treatment immediately after his arrival.
This system looks like very much Estonian, making the full use of digital technology and pursuing the utmost efficiency!
Witnessing such a system turned out to be a very precious occasion both for the Ambassador and Dr. TAKENAKA!
The Ambassador would like to express his sincerest gratitude to Dr. LÄÄTS and other staff of the Center for welcoming him under COVID19!