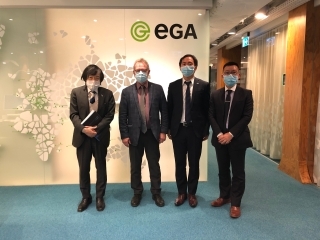 Together with Dr. OTT 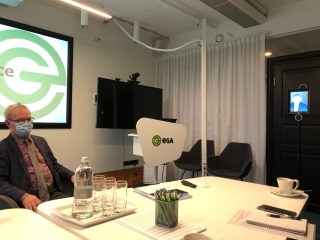 A briefing by Dr. OTT
On 17th November, Ambassador KITAOKA visited “e-Governance Academy” in Tallinn, the capital city, escorted by two Embassy staff, Mr. Tomoya SHIGENARI, a Second Secretary in charge of economic affairs and Mr. Hiroshi TAKENAKA, Researcher.
“e-Governance Academy”, which was founded in 2002 as a non-profit organization, is aiming at sharing the Estonian precious experience of her most successful digitization in such a generous manner with the other countries through accepting foreign delegations, holding training courses, giving consultancies, holding international conferences and so on, in order to promote digitization all over the world.
From Japan, many important people have already visited this Academy including Ms. Masako MORI, the ex-Minister for Justice and Mr. Akihisa MIWA, the Government CIO, to receive precious briefings on e-Governance.

After the arrival of the Ambassador, who was guided into a conference room and sat, the room’s door was closed, and then opened.
Who do you think came in?
A robot!
Its face is a display, showing the handsome face of Mr. Hannes ASTOK, the Executive Director and the Chairman of the Management Board of the Academy.
As a matter of fact, Mr. ASTOK was in Tartu at that moment, but managed to appear in front of the Ambassador as a robot to greet him.
The greeting in this manner overcomes mutual distance and even COVID 19!
Mr. ASTOK (or a robot on his behalf) announced the pleasant news saying that the joint venture contract will be concluded with Mitsubishi UFJ Research & Consulting.

In the conference room, it was followed by the briefing by Dr. Arvo OTT, who is the Director of e-Government Technologies, and a member of the Management Board of the Academy.
He introduced the Academy itself, and the success of the digitization of Estonia with its history and tips.

Ambassador KITAOKA expressed his sincerest gratitude for the Academy’s warm welcome extended to so many Japanese visitors.
Dr. OTT extended his invitation to the Ambassador for the 7th “e-Governance Conference”, scheduled to take place from 18th to 20th May next year.
The Ambassador replied that he will definitely participate in it with a great pleasure!
The meeting finished in such a friendly manner.