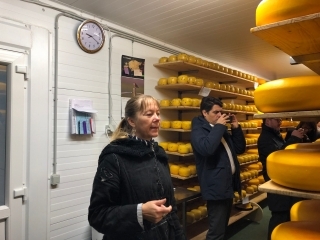 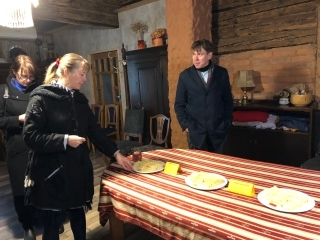 Sample testing of the products
From 21st to 22nd September, Ambassador KITAOKA, with the invitation of the Ministry of Rural Affairs, joined a study tour to inspect the agriculture in Estonia.
He was accompanied by Mr. Tomoya SHIGENARI, a Second Secretary in charge of economic affairs in the Japanese Embassy.
On the 2nd day of the tour, the participants left Otepää, where they stayed overnight, in the early morning, and headed for the north east for 45 minutes to get to Kambja in Tartu County to visit “Andre Cheese Farm”.
The participants were welcomed by Ms. Erika PÄÄBUS, a co-founder of the Farm to get a briefing on the Farm, followed by a guided tour into its factory.
Then the participants, by using buses, moved to its shop nearby to enjoy sampling of the products and shopping.
The Farm has started its cheese production 6 years ago from the very scratch without any expertise.
Though the size of the Farm is small with 390 cows, its products have come to win international awards and recognitions.
Their export is also taking place to Singapore etc.
Ms. PÄÄBUS said “there is no secret in our success. Only through trials and errors, applying different bacteria or changing maturing time, our products have been improved gradually to get to the present”, which were very impressive remarks for the Ambassador KITAOKA.
Their cheeses, both young and matured, sampled by the Ambassador, were just exquisite, and he was convinced that they have enjoyed many awards!

Thereafter, the participants headed for the north west for 1 hour and 45 minutes to get to Põltsamaa in Jõgeva County to visit “E-Piim Tootmine (E-Milk Production)”, which is the biggest dairy production cooperative in Estonia.
This visit has become the second for the Ambassador, following his visit in September last year.
The participants were welcomed by Mr. Jaanus MURAKAS, the Chairman of the Board, who gave a briefing on the present situation of milk production in Estonia, together with the history and the present situation of “E-Piim”.
Their cheese, whose taste is so much suitable for the Japanese, is a favorite of the Ambassador, and its export to Japan has increased by 6 times in the past five years!
Now, in order to increase the production capacity, the construction of a new factory in Paide, located at the center of Estonia, is on-going.
Then the participants enjoyed a guided tour into the factory, which is so well organized and clean, and using Japanese machine for packaging.

Thereafter, the participants move to a conference facility nearby to listen to the roundtable discussion entitled “How to export Estonian milk products”, which was attended by Mr. MURAKAS, Ms. Meeli LINDSAAR, Board Member of Chamber of Agriculture and Commerce, and Mr. Siim TIIDEMANN, Deputy Secretary General of the Ministry of Rural Affairs.
Mr. MURAKAS referred to the difficulties of the export outside EU, which was contrasted to the smooth export to Japan, based on the agreement with EU to recognize each other’s standards mutually.
The Ambassador KITAOKA expressed his sincere congratulations for the beginning of the construction of the new factory, which has started in July to be completed in 2 years times, and said “this is another important step to promote the Estonian export to Japan further!”.
On that spot, Mr. Margus LEEK, the CEO of “E-Piim”, extended to the Ambassador his invitation to the ceremony to remember the beginning of the new factory construction, which the Ambassador received with great honor! 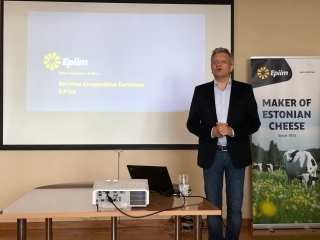 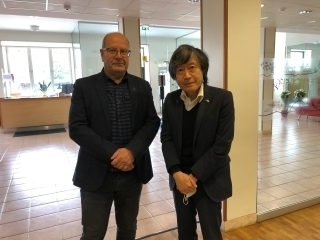 Together with Mr. LEEK, CEO of “E-Piim” 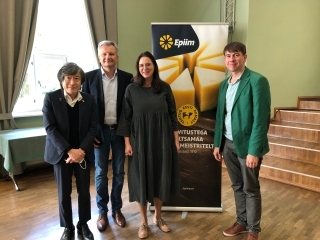 Together with the participants in the roundtable discussion