Ambassador KITAOKA made his 3rd visit to Viljandi visiting the factory of “Woolish”, the highest quality brand of wool products in Estonia 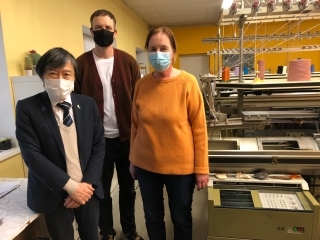 In front of the Japanese knit machines, with Mr. SIIMU, the President and his mother Külli, who introduced those machines With Mr. SIIMU and his parents
On 6th May, Ambassador KITAOKA, following his visit to the main store of “Woolish”, which is known as the highest quality brand of wool products in Estonia on 4th, visited its factory with the kind invitation by Mr. Eigo SIIMU, the President.
It is located in Viljandi, known as so rich in culture, in the southern part of Estonia.
For the Ambassador, this visit there has marked the 3rd, following the diplomatic corps’ tour in the year before last, and his participation in the ceremony for the 102 years Anniversary of the Estonian Independence, hosted by the President in February last year.
He was escorted by two Embassy staff, Mr. Tomoya SHIGENARI, a Second Secretary in charge of economic affairs and Mr. Hiroshi TAKENAKA, Researcher.

Ms. Hilda VALDRE, who is the great-grand mother of Mr. Eigo SIIMU, the present （4th） President of “Woolish”, started making sweaters in 1890’s, and set up her factory in Viljandi in 1928.
The factory’s location moved within Viljandi, but the history of “Woolish” has been always with this beautiful cultural city.
Even now, the tags attached to all the “Woolish” products say “Made in Viljandi. It’s in Estonia. Google it!”, always reminding us of such a deep nexus between Viljandi and “Woolish”.
A daughter of Hilda, Daisy succeeded the sweater manufacturing through the dark period under the Soviet Union.
Her work has been further succeeded by her daughter, Külli, who won TV bingo show, invested the prize money to introduce knit machines.
They are made by Japanese “Shima Seiki”, and though getting a little bit old now, still functioning in a good condition thanks to the meticulous maintenance by Külli’s husband!

The Ambassador was guided into the factory by Külli and her son, Mr. Eigo SIIMU, and made an impressive encounter with those Japanese machines!
The Ambassador also enjoyed greeting to Mr. SIIMU’s sons, touching elbows (no hand shaking because of COVID19!), which has become the moment for the Ambassador to anticipate the future of “Woolish” to be succeeded further to the 5th and even to the 6th generation.

Mr. SIIMU said that he is feeling big potential in the Japanese market.
All the products of “Woolish” are designed by Anna, Mr. SIIMU’s wife.
Thanks to her design, those products are wearing such a delicacy despite made from wool, which could be very much favored by the Japanese.

“Woolish” products are available also in Japan by using on-line shopping.
Please browse by internet, if you are interested!