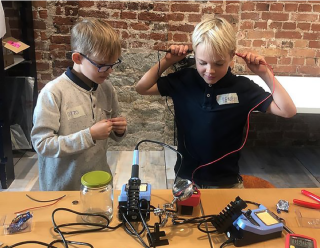 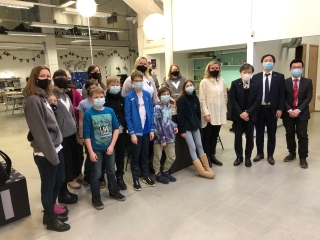 A Photo Session
On 18th February, Ambassador KITAOKA, visited “VIVISTOP”, Estonian revolutionary education facility, which is located in the suburbs of Tallinn, the capital city.
The Ambassador was escorted by two Embassy staff, Mr.Tomoya SHIGENARI, a Second Secretary in charge of economic affairs and Mr. Hiroshi TAKENAKA, Researcher.
“VIVISTOP” is the facility, which has been deployed into 8 countries by “VIVITA Japan, Inc.” founded by a Japanese investor, Mr. Taizo SON, and is headquartered here in Estonia.

The Ambassador was welcomed by Ms. Mari-Liis LIND, Producer and co-Founder of “VIVISTOP” together with Mr. SON, and was ushered into the working space.
The briefing session followed with the participation of the staff, including Ms. Sigrid KÄGI, Partnership Leader, and Ms. Eva Liisa KUBINYI, Child Culture Designer.

There is no curriculum nor text book!
Children gather together only to fulfill their interest in “I want to make it!” or “I want to know it!”, only when they want to come.
The “VIVISTOP” staff welcome them not as teachers but as the equal partners.
The working space is equipped not only with computers, but also with various kind of tools, which are those for professionals.
This is not a school, but not a playground either.
The most unique space is offered to children free of charge!
Then the Ambassador met the children, who are interested in DNA and deepening their understanding by making DNA model, which was followed by a photo session, to finish the visit.

After taking the office in the year before last, the Ambassador has met so many surprises in Estonia, and today, he has met yet another surprise, which is something to be called “yes! This is Estonian!”,
The visit this time turned out to be a precious occasion not only for the Ambassador, but also for his staff, escorting him.
The Ambassador would like to express his sincerest gratitude to “VIVISTOP” headed by Ms.LIND for welcoming him under COVID19!