2020/11/6
On 6th November, Ambassador KITAOKA visited the library of Viimsi parish, next to Tallinn, the capital city, together with Mr. Toshifumi ITO, a Second Secretary in charge of culture and public relations at the Japanese Embassy.
The Ambassador delivered a speech at the opening of Shodō (Japanese Calligraphy) Exhibition by Shiroki (Ms. Motoko SHIOKAWA), and the publishing ceremony of a book of poetry by two Japanese poets, Ms. Mariko SUMIKURA, and Ms. Taeko UEMURA.

The Ambassador’s visit was materialized by the kind invitation by Ms. Taimi PAVES, who is the Director General of the Estonia-Japan Association (EJA), and also a co-translator of the book of poetry together with Mr. Jüri TALVET, a Professor Emeritus of Tartu University.
The Ambassador was greeted by Ms. Tiiu VALM, the Director of the Library and delivered a speech.
Then the Ambassador enjoyed the Exhibition and video demonstration of Shodō by Shiroki, whose passion was expressed in such an affluent manner!
Indeed, it was a pity that Shiroki’s visit to Estonia had to be cancelled because of COVID 19!
It was followed by Prof. TALVET’s introduction on how the book of poetry has come to be published, which was very interesting for the Ambassador.
Finally, a Japanese flutist, Ms. Mizuki SHINDO appeared and played Japanese tunes with such a warm tone.
She also recited poems in the book of poetry with two members of Viimsi Gymnasium theatre hobby club.

The Ambassador, in his speech, said “in Japanese culture, there does exist “self-contradiction”, where passion is expressed even more dramatically by restricting expressions even more severely. Shiroki’s expressions are much freer than those of traditional style of Shodō, but she succeeded in expressing passion even more dramatically. Indeed, she succeeded in overcoming tradition, starting with tradition. Concerning the book of poetry, there is a beautiful harmony among poems, Japanese characters used in a visual manner, and illustrations of Mr. Kokyo HATANAKA, which has created a fantastic atmosphere”.

Ms. Tiia-Ester LOITME, who is a known conductor and an honorable awardee of the Japanese decoration, also attended.
The event finished in such a friendly manner by memorial photo sessions.

The Ambassador expresses his sincerest gratitude to Taimi-san for her such a kind invitation and a wonderful evening!

The exhibition is planned to be held at the library of Viimsi parish from November 6th to December 6th 2020, and then at the Tartu Public Library from February 26th to March 26th 2021. Don’t miss! 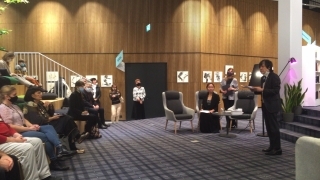 A speech delivered by the Ambassador 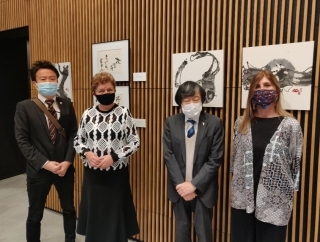 Together with Mrs. Paves and Director of the Library