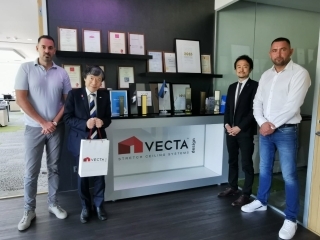 Together with the representatives of Vecta Design 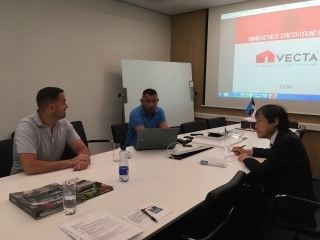 Briefing session at their office
On 14th to 15th July, Ambassador KITAOKA made his 2nd official visit to Pärnu City!
He was accompanied by Mr. Toshifumi ITO, a Second Secretary in charge of culture and publicity.
Pärnu City is very important from the viewpoint of the Estonian-Japanese friendship, since it has signed the cooperation agreement with a Japanese city, Ichikawa in Chiba Prefecture in October in the year before last.
This agreement has led to the visit by Prime Minister (at that time), H.E. Mr. Jüri RATAS to Ichikawa during his official stay in Japan in February last year.

On the 2nd day of his visit, the Ambassador visited a local enterprise, “Vecta Design”, which was founded in 2006.
Their product, “stretch ceiling” is to create ceilings or walls by stretching elastic materials, on the surface of which, various colors, designs, pictures or photos can be printed.
It could further be combined with illumination or audio equipment to create futuristic atmosphere, which could never materialize by using traditional ceilings or walls.
Indeed, their product is very Estonian, which is always full of futuristic ideas, and it has come to be used widely all over the world in leading hotels like Hilton or Radisson, exhibition facilities, airports and so on.
The Ambassador was welcomed by Mr. Vassili MALÕŠEV, Project and Export Sales Manager and Mr. Robin DUNNEWIJK, Business Development Manager.
Following the briefing session at their office, a guided tour was conducted to the show room and the factory.
The Ambassador praised their manufacturing process, so meticulous to attain the best quality, which is also very much Estonian.
Concerning their products, in which Japanese companies have started showing their interests, the Ambassador said, “they make a good match with the Japanese sense of beauty. Together with their very high quality, they have a big potential in the Japanese market”.

With this visit, the Ambassador’s 2nd official visit to Pärnu City has been completed!
Ambassador KITAOKA would like to express his sincerest gratitude to Mrs. Anu JUURMA-SAKS, the Head of PR for her meticulous arrangements, which made this visit the most fruitful, and to Pärnu City! 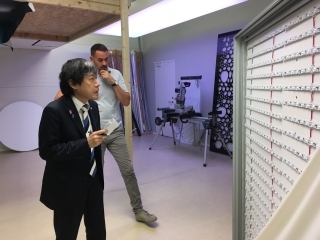 Guided tour of the show room 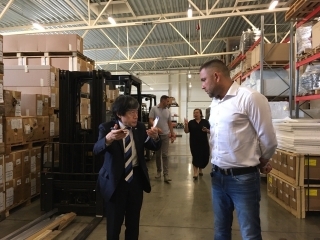 Guided tour of the factory