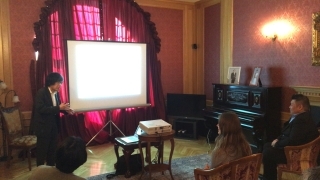 Presentation by the ambassador 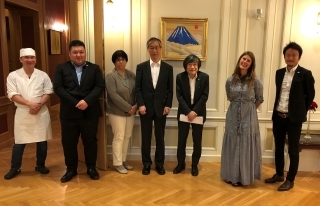 Together with the participants
Tallinn is the capital city, whose beautiful “Old Town” is so famous among many tourists!
Have you ever visited VABAMU (Museum of Occupation and Freedom), which is located near the “Old Town”?
If not, you are highly recommended to visit it!
We have already reported that Ambassador Kitaoka visited this Museum on 10th March in this Facebook on that date.
After its opening, the Museum was on the “occupation” by Soviet Union and Nazi Germany, and after its renovation, the visitors could also learn “freedom”, which Estonia has eventually gained after the recovery of independence.

On 7th July, Ambassador Kitaoka invited to his residence, Ms. Keiu Telve, the Executive Director of VABAMU, together with Ms. Ene Selart, who is conducting researches on the Japanese history at Tartu University in Estonia, and Mr. Shingo Masunaga, who is conducting researches on the espionage history at Turku University in Finland.
From the Japanese Embassy, Mr. Matsumura, the Counsellor a known expert of the Nordic and Baltic history, and Mr. Ito, Second Secretary in charge of culture and publicity attended.

The meeting started with the Ambassador’s power point presentation, entitled “What is Japan? Island Country, so mysterious”.
Then Ambassador expressed his gratitude to VABAMU for welcoming him in March.
He also congratulated the success of “crowdfunding” for the project “Estonia and Japan Relations (19th century until 2020)”, which has been promoted by Ms. Selart and Mr. Masunaga.
Ambassador stressed the importance of VABAMU, whose role could be essential for the Japanese to understand Estonia deeper, which could lead to the long-lasting friendship between those two countries.
It was followed by the discussions on concrete steps to be taken to promote the cooperation between VABAMU and Japan.
While enjoying the authentic Japanese cuisine cooked by Mr. Takaaki Arai, the official chef of the Ambassador, all the participants wished for the deepening of Estonian-Japan friendship!