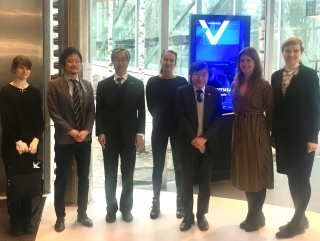 Together with the Representatives of VABAMU 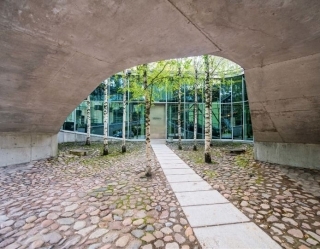 He was welcomed by Ms. Keiu Telve, Executive Director, and Ms. Maia-Liisa Anton, Exhibition and Event Manager, and inspected the inside of the Museum.
From the Japanese Embassy, Mr. Matsumura, the Counsellor and an expert of the history of the Baltic and Nordic countries, and Mr. Ito, a Second Secretary in charge of culture and public relations, and Ms. Made Leene Truu escorted the Ambassador.

This Museum was opened in 2003, and is proud of its history as the first Museum opened by Estonia herself, which has recovered independence in 1991.
Its entrance is a heavy iron door, symbolizing the dark Soviet period.
But once entering inside, most of the building is covered by glass, symbolizing the bright and transparent Estonia now, which is a huge contrast against Estonia before the recovery of independence.

Just after the opening, the Museum was just about the “occupation” by Soviet Union and Nazi Germany.
But it was renovated in 2018, so that visitors could learn “freedom”, which Estonia has eventually gained after the recovery of independence.
After spending two hours for the inspection of the Museum, Ambassador was briefed on the future Museum projects by Ms. Telve and Ms. Anton, which was followed by the discussions on how to promote the cooperation between the Museum and the Japanese Embassy in the future.

Ambassador said “Estonia learned from her history of hardships with “occupation”, and eventually overcame it. That is the reason why Estonia has succeeded in becoming one of the most advanced IT countries, while enjoying “freedom”. Only after studying both of the “occupation”, and the ”freedom”, we can eventually come to understand the present Estonia clearly”.
And Ambassador expressed his wish to tell the importance of visiting this Museum to as many Japanese people as possible.