Ambassador KITAOKA made his 1st visit as the Japanese Ambassador to Türi City, the “Spring Capital” 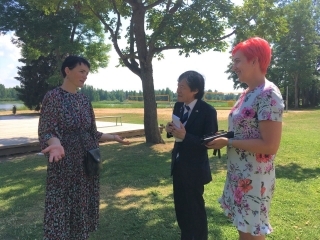 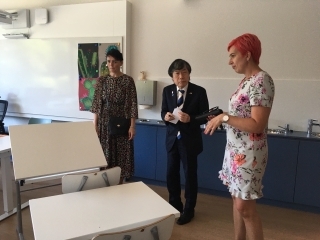 Guided tour of a school
On 15th July, Ambassador KITAOKA made his 1st official visit as the Ambassador of Japan to Türi City！
He was accompanied by Mr. Toshifumi ITO, a Second Secretary in charge of culture and publicity.
Türi City is nicknamed as “Spring Capital” because of its annual flower market and a lot of cherry trees, blossoming in spring.
This visit followed the visit to Pärnu City, which means the Ambassador visited “Summer Capital” and “Spring Capital” in succession!
It was a strong wish for the Ambassador to visit Türi City, sharing cherry trees so important for the Japanese, which is a potential to make friendship agreement with a local Japanese city in future.

On his arrival, the Ambassador was greeted by Ms. Aili AVI, a Member of the Commission of Education of the City, who conducted a guided tour inside the Municipal Government Building, which was newly opened, and a school.
It was followed by a meeting with Ms. Pipi-Liis SIEMANN, the Mayor, who took the Ambassador to the side of Türi Lake to enjoy the scenery of 155 cherry trees.
Those trees were planted in 2006 to commemorate the 80 years Anniversary of the City.
The Ambassador praised the beautiful line-up of those trees, imagining them fully blossoming in spring.
He explained to the Mayor what is “Hanami” or flower viewing, a favorite for the Japanese.
He also expressed his wish to encourage Japanese tourists to visit Türi City and referred to the possibility of friendship agreement with a local Japanese city.
The Mayor told the Ambassador that she has been promoting a project to support young families financially by using the City budget on condition that they live in the City at least for 5 years, in order to overcome the challenge that the City is losing its population by 100 each year.
With red hair as her trademark, the Mayor is loved by the citizens of the City, and also popular in Estonia.
She explained the Ambassador the origin of her name “Pipi”.
It has come from the name of the heroine of a masterpiece “Pippi Långstrump” written by Ms. Astrid Lindgren, a Swedish novelist.
The name was chosen and given to the Mayor by her father when she was born as his first child.
The Ambassador said he wishes that Türi City could be prosperous in the future under the Mayor so active like Pippi, and also wishes that the friendship agreement with a local Japanese city could materialize in the future.
The Ambassador’s visit to Türi City, as the 1st by the Japanese Ambassador, finishes with a photo session in such a friendly manner!