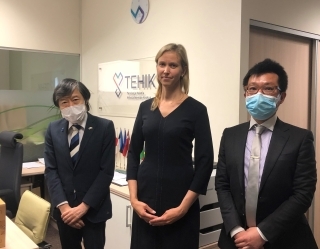 Together with Ms. REINHOLD, the Director
On 28th May, Ambassador KITAOKA visited TEHIK (Health & Welfare Information Systems Center), which is managing “e-health” system, by which, the Estonian population’s health data is accumulated and utilized.
This system is designed by Estonia, one of the most digitized countries.
The Ambassador, escorted by Mr. Hiroshi TAKENAKA, Researcher, got briefing from the Director of TEHIK, Ms. Katrin REINHOLD, on the details of the system.

With this system, the health data of each Estonian is registered, accumulated and utilized by people engaged in medical sector.
If some patient needs a treatment by a new doctor, the doctor could make an access to the past medical data of the patient immediately, based on which, the doctor could start the fresh treatment.
This system has become possible by the following three infrastructures;
“Digital ID” given to each Estonian.
“X-road” connecting data bases and enabling the data exchanges.
“Legal system” supporting the above-two.

At the same time, this system could protect the health data, which is the ultimate privacy of the population.
Those two requirements, which look contradictory against each other, could co-exist.
Accordingly, the future of the medical system has materialized here in Estonia.

The briefing given by Ms. REINHOLD was not only very interesting but also useful for thinking about the future of the Japanese medical system, both for the Ambassador and Mr. TAKENAKA, who is a medical doctor.
The Ambassador would like to express his deep gratitude to the Director, Ms. REINHOLD, for accepting him under the COVID19!