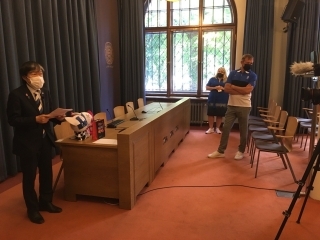 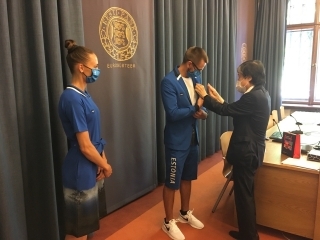 Pin badges presented to the athletes
On 5th July, Ambassador KITAOKA attended the “Encouragement Ceremony for the Estonian Team for the Tokyo Olympics” hosted by the Estonian Olympic Committee to deliver a speech to encourage all the 34 members of the Estonian Team (due to COVID-19, only two represented members attended).
Mr. Toshifumi ITO, a Second Secretary in charge of culture and public relations, and Ms. Made Leene TRUU escorted the Ambassador.
The Ceremony, held at the hall of the Bank of Estonia, was inaugurated by Ambassador KITAOKA’s speech.
The Ambassador said in his speech “it is indeed a big challenge for Japan to host the Olympics amid COVID-19. In order to overcome this challenge, Japan needs the unity with as many people as possible, and as many countries as possible. Estonia is one of the first countries, who showed such a unity by issuing the coin and the postage for the Tokyo Olympics”.
He also referred to Saku city in Japan, the sister city of Estonian Saku city, which has been waiting for the arrival of the Estonian athletes so anxiously as their host town.
The Ambassador said “during one year and 10 months, while I worked as the Ambassador in Estonia, I have already become half-Estonian. Therefore, here in Estonia, together with all of my Estonian friends, I am determined to cheer all the members of the Team Estonia!”.
It was followed by the speech by Mr. Urmas SÕÕRUMAA, the honorable President of the Estonian Olympic Committee.
Then in the Q & A session, questions were posed to the two represented members of the Team, Mr. Peeter OLESK (Sport Shooting), and Ms. Ksenija BALTA (Long Jump).
Eventually the Ambassador presented those two members with pin badges to commemorate 100 years of friendship between Estonia and Japan.
The ceremony finished with the photo session in very much a friendly manner.
The Ambassador and all the staff of the Japanese Embassy, from the bottom of their heart, wish for the best of luck to all the athletes of the Team Estonia! 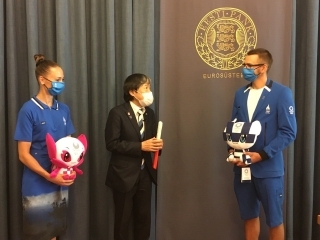 The Ambassador encouraging the athletes