Ambassador KITAOKA made his 9th official visit to Tartu, the center of the Southern Estonia (2nd Instalment: Visit to the Tartu Ambulance Center) 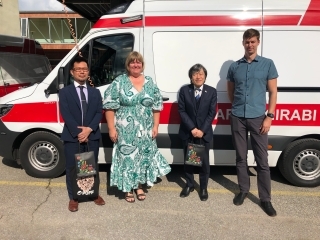 Together with Dr. REINHARD, Chairperson of the Board and Mr. SARV, IT Manager
On 23rd August, Ambassador KITAOKA made his 9th official visit to Tartu, the center of the Southern Estonia.
He was escorted by Dr. Hiroshi TAKENAKA, Researcher of the Embassy and a medical doctor.

The Ambassador, who left Tallinn, the Capital City, early in the morning, arrived at his 2nd destination, the Tartu Ambulance Center in the afternoon, following his 1st visit to the Estonian Genome Center of the Tartu University.
The Ambassador was welcomed by Dr. Veronika REINHARD, Chairperson of the Board and Mr. Toomas SARV, IT Manager.

The visit started with the power point presentation made by Dr. REINHARD, and Mr. SARV.
The Ambassador has already visited the Ambulance Center of the North Estonian Hospital, so the visit this time gave him the chance to compare it with the Ambulance Center in Tartu, the second largest city following Tallinn.
The same system of “e-Ambulance”, which is used in the North Estonian Hospital, is also operating in the Tartu Ambulance Center.
By using iPad, the hospital to where the patient to be sent has been chosen swiftly, considering the patient’s condition and the distance to the hospital.
The designated hospital, immediately after the arrival of the patient, starts the most adequate medical treatment based on “ambulance card”, where the patient’s medical data in the past and the present are stored.
Following the briefing, a conducted tour was arranged by Dr. REINHARD for the Ambassador into the Center.
Dr. REINHARD is also the Deputy President of the Estonia Ambulance Association, and a veteran of emergency treatment, who worked in Afghanistan based on the Estonian National Defense College in the past 10 years..
The system of “e-Ambulance” looks like very much Estonian, making the full use of digital technology and pursuing the utmost efficiency!
Confirming such a system, operating well also in the Southern Estonia, turned out to be a very precious occasion both for the Ambassador and Dr. TAKENAKA!

The Ambassador would like to express his sincerest gratitude to Dr. REINHARD and Mr. SARV for welcoming the Ambassador in such a warm manner under the COVID19!