Ambassador KITAOKA had a meeting with Mr. TAMMSAAR, Undersecretary of the Foreign Ministry to commemorate the 100 years of friendship between Estonia & Japan 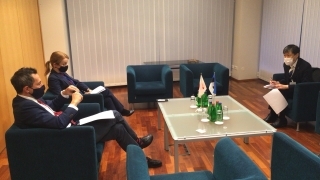 The meeting commemorating the 100 years 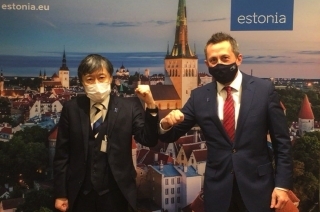 Undersecretary and Ambassador
This year has marked the 100 years of friendship between Estonia and Japan!
Estonia, which declared her independence in 1918, fought the Independence War against Soviet Russia, and attained the independence by Tartu Treaty in 1920.
And on 26th January in that year, Japan acknowledged Estonia as the legal government.

And on the same day this year, after as long as 100 years have passed, Ambassador, following his attendance at the flag-hoisting ceremony hosted by President, visited the Estonian Foreign Ministry accompanied by Mr. Toshifumi ITO, a Second Secretary in charge of culture and public relations at the Japanese Embassy.
Ambassador had a meeting with Mr. Rein TAMMSAAR, Undersecretary in charge of political affairs in order to discuss how to promote the bilateral friendship even further, making the 100 years commemoration as the spring board.
The meeting was also attended by Ms. Merike GRÜNTHAL, a first secretary of the Asian Division.
Many ideas were exchanged, which were so wide-ranged covering business promotion, cooperation based on Estonian high technology, cooperation on cyber security, exchanges between local governments, and so on.

After the meeting, Ambassador handed a pin-badge commemorating the 100 years, which was designed by Estonia, to Undersecretary.
Undersecretary, in return, presented Ambassador with Estonian chocolate, which is known as the best in the world, in a box with the logo mark of 100 years.
Finally, a photo session took place with Undersecretary and Ambassador, both wearing the pin-badge, and the meeting has finished in very much a friendly manner. 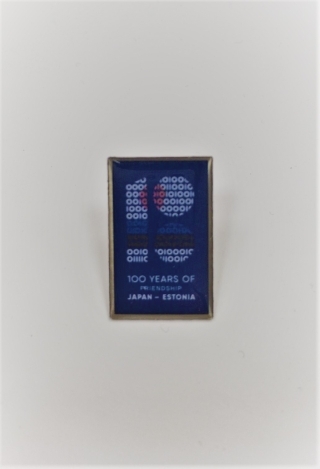 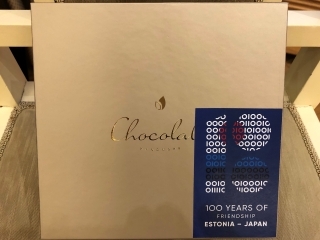 Estonian chocolate with the logo