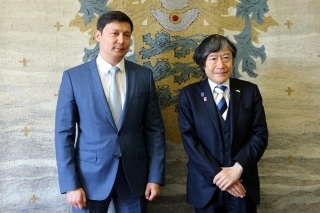 Together with Mr. Kõlvart, Mayor of Tallinn 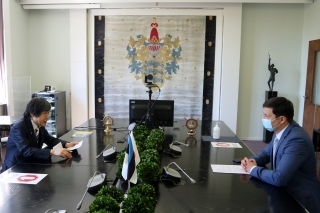 Meeting to strengthen the cooperation
On 11th June, Ambassador KITAOKA visited the City Government Office of Tallinn, the capital city, and had the 1st Official Meeting with Mr. Mihhail KÕLVART, the Mayor.
This Official Meeting has been a wish for the Ambassador since he took his office, but it has been postponed due to COVID19, and eventually materialized!
Mr. Toshifumi ITO, a Second Secretary in charge of culture and public relations of the Japanese Embassy and Ms. Heili LUIK, Head of Public Relations Service of Tallinn City also attended.
The Mayor welcomed the Ambassador and said “this year is very important for both Japan and Estonia, since it is marking 100 years of friendship between our two countries, and 10 years anniversary of “Japanese Garden” in Tallinn. On top, the Tokyo Olympic Games are being held. It is a pleasure to have the 1st Official Meeting with you in this memorable year”.
The Ambassador introduced the episode of ex-Prime Minister, Jüri RATAS’ official visit to Japan in February last year, when Mr. RATAS proposed to sign a friendship agreement between Tallinn and Osaka.
The Ambassador also introduced that the sister city agreement was already signed between Saku city in Estonia, and Saku city in Japan.
He also introduced that the friendship is being promoted between Pärnu and Ichikawa city in Japan, and between Haapsalu and Kaga city in Japan.
He said “the cooperation at the regional level plays an important role to promote the Estonian-Japanese friendship. Therefore, I hope you could think about the possibility of the agreement between Tallinn and some Japanese city”.
The Mayor responded “to start with, we must hold more events or materialize more exchanges of people between us. The Estonians have an deep affection for Japanese culture, so there is a big potential”.
Then the Mayor explained to the Ambassador, the management of Tallinn, where the percentage of the ethnic population is high.
The Mayor said “the co-existence of different cultures is a resource for the development of the society”, which was very impressive for the Ambassador.
Eventually, the Ambassador presented the Mayor with “Kiyomizu-yaki”, a traditional Japanese pottery.
The meeting finished in a very friendly manner with a photo session.