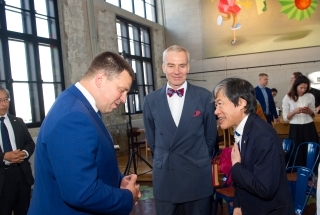 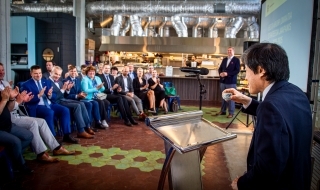 Toast by “kampai!” following the name of the restaurant
On 21st August, the Government of Estonia announced “Estonian Business Strategy for JAPAN 2020-2025"!
This has been drafted by the members of the Estonian Embassy in Tokyo headed by H.E. Mr. Väino REINART, the Ambassador.

The ceremony was attended by H.E. Mr. Jüri RATAS, the Prime Minister, together with Ambassador REINART and his wife, Ms. Kaire JÜRGENSON.
From the Japanese Embassy, Ambassador KITAOKA attended, accompanied by Mr. Hajime MATSUMURA, the Counsellor and Mr. Tomoya SHIGENARI, a second secretary in charge of the economic affairs.

The announcement of this Strategy is the precious follow-up of the Prime Minister’s official visit to Japan, leading one of the biggest business delegations, which took place in February this year.

The announcement ceremony, which was so well attended by about 60 Estonian business persons, started with the Prime Minister’s speech.
He introduced the history of the Estonia-Japan friendship, where Japan is one of the first countries which recognized the recovery of the Estonian independence in 1991.
He said that, since then, Japan has been continuing to be the most important Asian ally for Estonia both politically and economically.
He also recalled his visit to Japan saying that the visit has become the last overseas visit before COVID 19 crisis, and said that he enjoyed the banquet hosted by the Japanese Prime Minister ABE.

It was followed by the speech by Ambassador KITAOKA.
He highly praised Estonia for her miraculous economic development after the recovery of independence, and said “Japanese observation for Estonia is the most favorable now, so this is the best timing to promote the bilateral business relationship. It takes time, but the creation of mutual trust is the key to make a success in business with Japan”.

The ceremony took place in a Japanese restaurant “Kampai”, which was recently opened by a famous Estonian investor, Mr. Indrek KASELA.
The chef of the restaurant introduced “Yamahai Genshu”, the “sake” for proposing a toast, together with the explanation of special brewery method called “Yamahai-jikomi”.
The following toast was made by Ambassador KITAOKA.
He expressed his utmost respect to the efforts made by the Estonian Embassy in Tokyo with the strong leadership of Ambassador REINART, and proposed a toast by saying “kampai!” following the name of the restaurant!