The ceremony to confer “The Order of the Rising Sun, Gold and Silver Rays” upon Mr. Agu Sisask 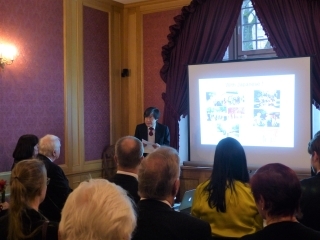 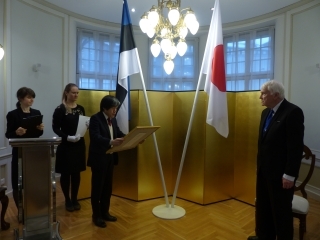 Ambassador reading the patent of the decoration with memorial photos
On December 6th, the ceremony to confer “The Order of the Rising Sun, Gold and Silver Rays” upon Mr. Agu Sisask was held at the ambassador’s residence. This was announced in May of this year as 2019 Spring Conferment of Decorations on Foreign Nationals, in recognition of his contribution to the introduction of Japanese literature in Estonia and the promotion of mutual understanding between Estonia and Japan.

At the ceremony, Ambassador Kitaoka looked back on the past activities of Mr. Sisask with photographs, explained again the achievements of Mr. Sisask with words of congratulations, and handed over the patent and decoration while being watched over by Mr. Agu Sisask's family and old friends. Mr. Sisask gave a remark of his appreciation also looking back his activities as a long journey, followed by blessings from each attendee in a festive atmosphere. It was a wonderful ceremony, symbolizing deepening mutual understanding between Estonia and Japan. 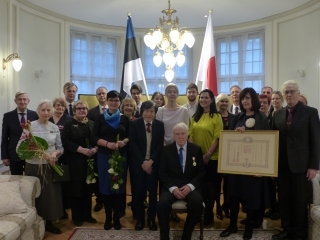 Each attendee celebrated Mr. Sisask with all of the attendees