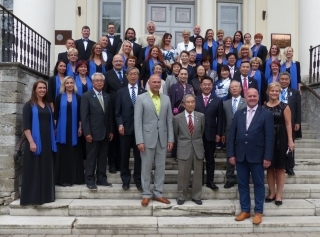 Reception held in Saku Estonia in 2019
On 1st December, the Ministry of Foreign Affairs of Japan announced the 2020 Foreign Minister´s Commendations. Saku Municipality shall be conferred with the commendation in recognition of their promotion of mutual understanding between Estonia and Japan.
Saku Municipality, Estonia and Saku City, Nagano Prefecture of Japan signed a Friendship City Agreement in 2007 and a Sister City Agreement in 2019, based on mutual trust and respect cultivated by mutual visits by local government officials and children, homestay exchanges, joint culture and sports activities, etc. The Embassy hopes that Saku Municipality will continue to contribute to the promotion of mutual understanding and friendship between the two countries in a wide range of fields such as education, culture, arts, and economy based on the cooperative relations with Saku City of Japan.