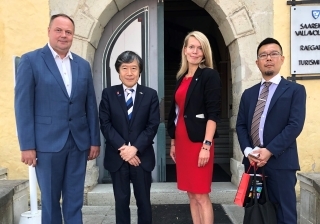 Together with Mr. Aivar ARU and Ms. Kristiina MARIPUU
From 26th to 27th of July, Ambassador KITAOKA made his 2nd official visit to Saaremaa Island, the biggest island in Estonia, following his 1st visit in March last year.
He was escorted by Dr. Hiroshi TAKENAKA, Researcher of the Embassy and a medical doctor.

On the 2nd day of his stay, following the visit to the State Gymnasium, the Ambassador visited the Municipality Office of Saaremaa, located in Kuressaare, the Capital of the Island.

He was welcomed by Ms. Kristiina MARIPUU, the Deputy Mayor, and Mr. Aivar ARU, the Deputy Chairman of the Municipal Council.

The meeting started with the showing of the PR video to introduce Saaremaa.
Kuressaare is introduced as “Estonia’s sun capital”, the richest in sunshine in Estonia all over the year.
And rich nature all over the Island, cultural events and local industry are also introduced together with colorful presentations.
The Ambassador, who was asked for comments, said “this is my 2nd visit to Saaremaa. Together with rich nature, I was also impressed by fresh meat and fish. Especially Saaremaa deer is the best meat, I have ever tried!”.
It was followed by the briefing on the administration of the Island, and exchanges of opinions on the wide ranged subjects including the possibility of cooperation with a Japanese local city.
It was also reported that “Saaremaa Opera Days”, which could be cancelled because of COVID19, was eventually held last week in a successful manner, and the communication with the mainland, which was temporarily cut off because of the recent ferry accident, has been successfully recovered.

The Ambassador’s visit has finished in a friendly manner with a photo session.
The Ambassador would like to express his sincerest gratitude to Ms. MARIPUU and Mr. ARU for sparing their precious time during the summer vacation season!