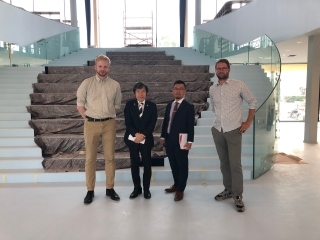 Together with Mr. Ivo VISAK and Mr. Mikk LAUR
From 26th to 27th of July, Ambassador KITAOKA made his 2nd official visit to Saaremaa Island, the biggest island in Estonia, following his 1st visit in March last year.
He was escorted by Dr. Hiroshi TAKENAKA, Researcher of the Embassy and a medical doctor.

On the 2nd day of his stay, in the morning, the Ambassador visited the construction site of the State Gymnasium, which will be the first in Saaremaa, to be opened in September.
He was welcomed by the Head Master, Mr. Ivo VISAK, and the Head of Gymnasium Construction, Mr. Mikk LAUR, who conducted a guided tour into the school building under construction.
Now the Central Government of Estonia has been promoting the project to set up the State Gymnasium in every county to standardize the education at Grade 10-12 (high school level in Japan), together with promoting the quality of the education further.
The setting up of the Saaremaa State Gymnasium is a part of that project.
The Ambassador praised the innovative and artistic design of the building, where the utmost efficiency is materializing, as “very Estonian!”.
He was also pleased to hear that Mr. VISAK, cooperating with his friend Mr. KUMAGAI, a Japanese entrepreneur of “Next Innovation”, to set up a course to teach the Japanese culture and society in November.
The Ambassador wished that the quality of the Estonian Education, which is ranked as one of the world’s highest in OECD’s PISA (Programme for International Student Assessment), could be promoted further.
He also said “I wish the students’ interest in Japan could be promoted as the result of the course on Japan, and eventually the Japanese language course could be set up in the future”, and promised the utmost support by the Japanese Embassy in the future.
His visit has finished in a friendly manner with a photo session.
The Ambassador would like to express his sincerest gratitude to Mr. VISAK and Mr. LAUR for sparing their precious time to give a detailed introduction of their Gymnasium!