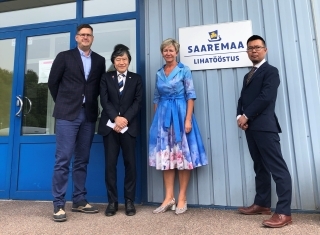 Together with Mr. TASA and Mrs. RÕÕM-LAANET
From 26th to 27th of July, Ambassador KITAOKA made his 2nd official visit to Saaremaa Island, the biggest island in Estonia, following his 1st visit in March last year.
He was escorted by Dr. Hiroshi TAKENAKA, Researcher of the Embassy and a medical doctor.

On the 2nd day of his stay, in the afternoon, following the visit to Baltic Workboats, the Ambassador arrived at Saaremaa Liha(meat)tööstus, known by its one of the biggest sales in the Island.
He was welcomed by Mrs. Kaie RÕÕM-LAANET, Member of the Board and the wife of the Defense Minister, Mr. Marek RAUD, Financial Manager, Mr. Miko TASA, Export Manager, Ms. Malle MÄGI, Chief Technologist and Mr. Illimar POOPUU, Production Manager.
Actually, in March last year, the Ambassador visited Saaremaa Piima(milk)tööstus, which was founded with Liha(meat)tööstus as the same enterprise in 1994.
After the foundation, those two were separated in 2007, and have continued their productions separately.
The Ambassador’s visit started with the briefing session on the company, accompanied by the tasting of its products.
Those processed meat products, using high quality local meat and organic production methods, are so delicious and sold in Estonia extensively through 20 company stores including that in Tallinn, the Capital City with popularity.
Estonian cheese has already been exported to the Japanese market to gain popularity, and the Ambassador said “Estonian meat products also have a big potential in the Japanese market!”.
The briefing session was followed by a guided tour into the company’s factory conducted by Mrs. LAANET.
The factory, very orderly so much like Estonian, is equipped with a slaughter house, so that the fresh meat could be processed immediately, which was impressive for the Ambassador.
The Ambassador’s visit has finished in a friendly manner with a photo session in front of the company’s office.
The Ambassador would like to express his sincerest gratitude to Mrs. LAANET and all the other staff of the company for sparing their precious time!

The Ambassador’s 2nd visit to Saaremaa has finished.
He headed for the ferry terminal, and left the Island in the evening, missing its beautiful scenery.