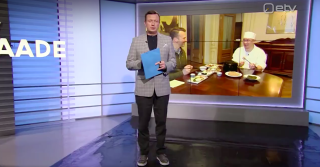 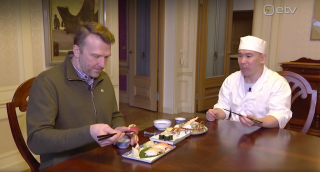 Tasting of Sushi and Tempura
On 31st March, Mr. ARAI Takaaki, the official Chef of the Japanese Ambassador, appeared in “RINGVAADE (Looking Around)”, a popular TV program of ERR (Estonian Public Broadcasting). He must be familiar with you because of his frequent appearances in our Home Page and Facebook!

Mr. ARAI took his office together with Ambassador KITAOKA in October last year. Since his arrival, Mr. ARAI has supported the Japanese diplomacy to Estonia as “diplomat of cooking”, entertaining many important Estonian guests, together with the other guests from all over the world including Japan.

In the program, Mr. ARAI started with shopping materials at markets in Tallinn, which was followed by the actual cooking of Sushi and Tempura. He also introduced some tips to make “vinegared rice”, which is an essential part of tasty Sushi, more delicious. He said “to cook delicious Japanese cuisine in foreign countries, you have to be creative”.

In Estonia, Japanese cuisine is very popular, and let’s hope this program could promote its popularity even further!

To see the program, please follow the link below.
https://menu.err.ee/1071138/jaapani-kokk-meisterdas-eesti-toorainest-sushi