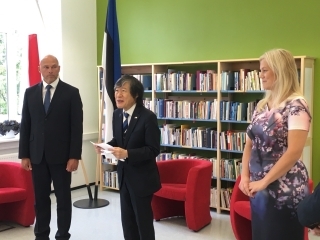 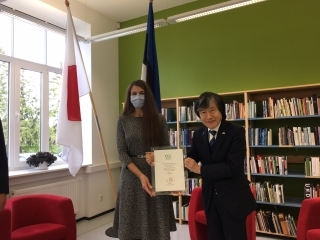 Together with Ms. VENTSER, Library Director
On 14th September, Ambassador Hajime KITAOKA made his 3rd official visit to Saku Municipality, which has signed a sister city agreement with the Japanese Saku City in Nagano Prefecture.
He was escorted by Mr. Toshifumi ITO, a Second Secretary and Ms. Made Leene TRUU, both in charge of culture and public relations in the Japanese Embassy.

The Ambassador, after finishing his lecture at Saku Gymnasium, visited Saku Rural Municipality Library, located at the 1st floor of the Gymnasium.
This Library was selected as a recipient of books under the Book Donation Project, conducted by the Nippon Foundation and implemented by the Japan Science Society, which has led to the donation of 19 books on Japan.
The ceremony was attended by Mr. Marti REHEMAA, Mayor, Mr. Tiit VAHENÕMM, Chairman of the Municipality Council, Ms. Maia SOKK, President of Saku Parish’s Japanese Friends Club, and Ms. Eva VENTSER, Saku Rural Municipality Library Director.
The Ambassador expressed his sincere gratitude to Ms. VENTSER for those 19 books displayed so beautifully in three-dimensional manner at the “Japan Corner”, located at the entrance of the Library, where Japanese Kabuto (helmet) and Hina-Ningyo (dolls for the girl’s festival) are also displayed.
The ceremony started with the speeches made by Mr. REHEMAA and Mr. VAHENÕMM, who congratulated the further promotion of the friendship between two Saku Cities triggered by the Tokyo Olympics etc., and expressed their gratitude for the donation of the books this time, expecting the deepening of Saku Municipality citizens’ understanding on Japan.
It was followed by the speech by Ms. SOKK, who introduced the history and activities of her Club, which is contributing to the relationship with Japan through the exchanges of books.
While emphasizing the importance of the exchanges of books, she also added that the book exchanges have become even more important because of COVID19, which has restricted the human exchanges, and this point has impressed the Ambassador.
Eventually, the Ambassador made his speech, where he expressed his gratitude for the Nippon Foundation and the Japan Science Society, and also praised the activities by Ms. SOKK’s Club.
He also said, “I think the two Saku Cities are so much benefited in terms of people. The Mayors and the Chairmen of both Cities are extremely active. On top, the Japanese Foreign Minister granted his commendation to the Estonian Saku, and the Estonian President awarded the Estonian State Decoration to the Mayor of the Japanese Saku. And the students of both cities have been enthusiastic on international association through the exchanges of homestay. In addition to those people’s contribution, it is a great pleasure to see that those books, which have just been just donated, could make another contribution to the promotion of friendship between those two Cities”.
Then the Ambassador read out the certificate of book donation signed by Mr. Yohei SASAKAWA, the Chairman of the Nippon Foundation, which was handed to Ms. VENTSER.
The ceremony finished in such a friendly manner with a photo session.
The Ambassador sincerely wish that those 19 books, so much wide ranged from Bushido, Japanese houses to Anime, could further promote the friendship between two Saku Cities! 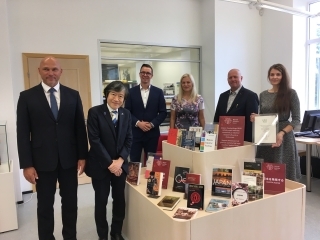 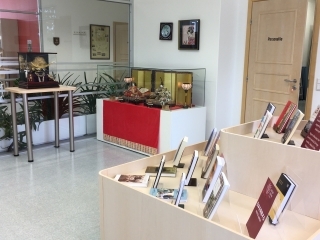 Japan Corner where Japanese Kabuto and Hina-Ningyo are also displayed