Ambassador KITAOKA made his first visit to Rakvere City

2020/9/22
On 22nd September, Ambassador KITAOKA made his first official visit to Rakvere City!
He was accompanied by Mr. Toshifumi ITO, a Second Secretary in charge of culture and public relations.

Together with the students and principal 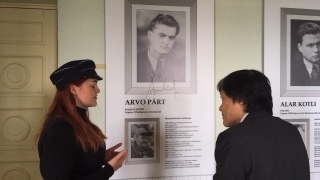 A tour guided by a representative of students
His stay in the city started with his visit to Rakvere Gymnasium, where 830 students of Grade 1 to 12 are studying.
The Gymnasium is famous for many distinguished graduates including Mr. Arvo PÄRT, an Estonian composer, who is an awardee of the “Praemium Imperiale in Honour of Prince Takamatsu”, a global arts prize, awarded annually by the Japan Art Association.

The Ambassador was welcomed by Ms. Riina VEIDENBAUM, the Principal, and a guide tour was conducted by a representative of students, Ms. Kristi-Liis Orupõld, to introduce the time honored school building dating back to 1930’s.
He learned the history of the building, the original of which has been connected with new buildings gradually to become the present beautiful appearance.
Ms. VEIDENBAUM told the Ambassador that “the national flag of Estonia is hoisted at the top of the school building for 24 hours everyday”, which deeply impressed the Ambassador.

2nd Installment: Meeting and Lunch with the Mayor, the City Council Chairman, and Baruto-san 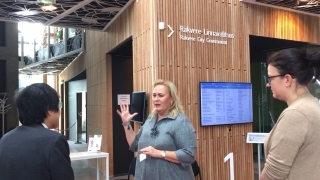 Welcomed by the Mayor 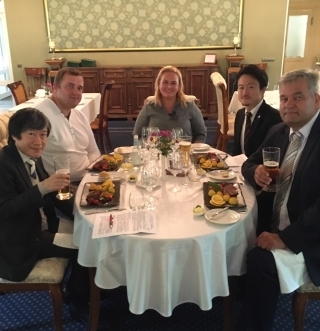 Then the Ambassador moved to “Restaurant Villa Theresa” to attend the lunch hosted by the Mayor and the honorable Chairman of the City Council, Mr. Mihkel JUHKAMI.
The Mayor told the Ambassador “surprise is waiting for you”.
It was indeed a pleasant surprise for the Ambassador that Mr. Kaido HÖÖVELSON (known as “Baruto”), a member of the Parliament (Riigikogu) and a former Sumo wrestler appeared as the special guest, which was a wonderful reunion for the Ambassador since he met Baruto-san on 15th July at the handing-over ceremony of Komatsu bulldozer (see our HP and FB on that date).
The Ambassador enjoyed local delicacies like duck.
And all the participants discussed extensively on the subjects like the possibility of Rakvere to sign the cooperation agreement with a Japanese city, sharing the same characteristics like spa, meat production, wooden door manufacturing, energy saving technologies etc.
They also discussed the possibility of the exchange of students between Rakvere Gymnasium and a Japanese school.
This first official visit to Rakvere turned out to be a precious occasion for the Ambassador to learn the importance of Rakvere, which is enjoying geographical advantages, located at in the midst of major cities like Tallinn, Tartu and  Narva. 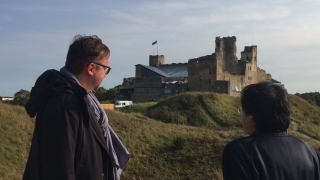 A long-distance view of Rakvere Castle 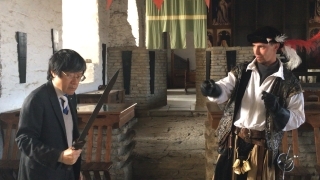 A passionate introduction of the castle
After giving a presentation at Rakvere Gymnasium, and attending the meeting and lunch with the honorable Mayor and the honorable Chairman of the City Council, the Ambassador visited the Rakvere Castle, which is a very popular tourist spot.
The Ambassador was welcomed by Mr. Viljar VISSEL, the Director of Virumaa Museums and Mr. Kaidu TIIRIK, the Development Manager of the Castle.
The Ambassador was impressed by the exhibition in the Castle, which is not just another museum, but is so rich in the atmosphere, which makes the visitors feel as if they were in the medieval period, actually living the life at that time.
This Castle, experiencing so many changes of its masters and so many battles since 13th century, seems to be telling the history of Estonia to the Ambassador.

After the guided tour in the Castle, the Ambassador visited “Tarvas”, the bull-shaped symbol of Rakvere, standing at the top of the hill near the Castle, and finished his very impressive first official visit to Rakvere City.