Ambassador KITAOKA had a briefing on the railway project, “Rail Baltica” 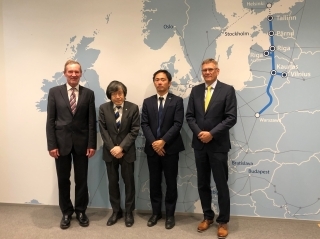 Together with the leaders of this project 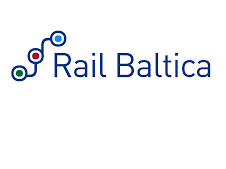 Logo of Rail Baltica
Now the railway project, “Rail Baltica” is underway.
This is a magnificent project, aiming at connecting three Baltic countries and Poland with a railway.
The total cost is estimated at 5.79 billion euro, and its completion is scheduled to be in 2026.

On 30th July, Ambassador Kitaoka, accompanied by Mr. Tomoya Shigenari, a second secretary in charge of the economic affairs in the Embassy, visited the project office in Tallinn, the capital city.
There, they had a briefing on the project from Mr. Aivar Jaeski, Director of RB Rail AS Estonian branch, and Mr. Tõnu Grünberg, CEO of Rail Baltic Estonia.

For Ambassador Kitaoka, the visit this time has come to be a very precious occasion to learn the benefits of the project, which is so wide-ranged, together with various challenges, which the project is facing.