Associate Prof. INOUE of Mukogawa Women’s University has just arrived in Estonia! Ambassador KITAOKA had a web-meeting with him 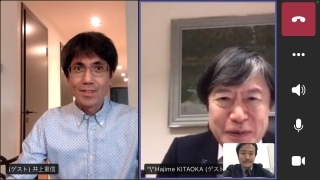 On-line meeting with Prof. Inoue
On 7th April, Ambassador KITAOKA had a web-meeting with Associate Professor, Shigenobu INOUE of Mukogawa Women’s University, who has just arrived in Estonia on 1st April, on how to promote the Estonia-Japan friendship further.
Mr. Toshifumi ITO, a Second Secretary in charge of culture and public relations at the Japanese Embassy has also attended.

Prof. INOUE is now self-distancing himself due to COVID19 at hotel in Tallinn, and on 12th, will move to the Faculty of Economics of Tartu University as a visiting researcher for the period of one year.
Actually, Ambassador KITAOKA has already met Prof. INOUE in Japan in February last year, when the Estonian Prime Minister RATAS (at that time) paid his official visit to Japan, and promised to make a re-union in Estonia.
Prof. INOUE’s visit to Estonia, originally scheduled in April last year, was forced to be postponed, but eventually he decided to materialize his visit and stay with his wife despite COVID19!
As was already introduced in our FB in February this year, “Marketing Communication Laboratory” of Mukogawa Women’s University, led by Prof. INOUE, introduced Estonia at “Mukojo Smile Festival” in Japan.

Estonia and Japan are celebrating 100 years of friendship this year.
And for Japan, which is now addressing the fundamental digitization of its society, needless to say, the promotion of friendship with Estonia known as the most digitized country in the world, is of utmost importance.
Ambassador, since his taking office in October in the year before last, has been looking for friends, who could share his ambition for the Estonia-Japan friendship.
Now he felt he has encountered another such friend.

Ambassador was impressed by Prof. INOUE, who has already got associated with key persons of the Estonia-Japan relationship while being in Japan!
Ambassador, Prof. INOUE and Mrs. INOUE have promised to make their utmost efforts to deepen the bilateral relationship further, cooperating closely.

Professor and Mrs. INOUE,
Ambassador sincerely wishes that your stay in Estonia could be a comfortable and fruitful one, despite COVID19!