Ambassador KITAOKA delivered a speech at the opening ceremony of “Embassy of the Plant Kingdom 2021” hosted by Tallinn Botanic Garden. He also had a talk with H.E. Ms. Liimets, the Foreign Minister 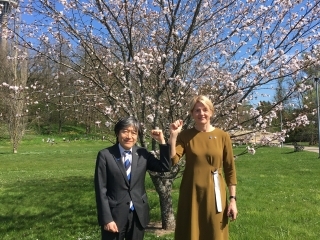 Photo session with the Foreign Minister under a cherry tree 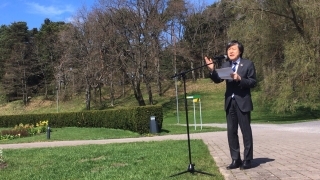 Speech by the Ambassador
On 12th May, Ambassador KITAOKA attended the opening ceremony of the culture festival “Embassy of the Plant Kingdom 2021”, which is hosted by the Tallinn Botanic Garden.
He delivered a speech and had a talk with H.E. Ms. Eva-Maria Liimets, Minister for Foreign Affairs, who also delivered a speech.
He also enjoyed a guided tour into the Botanic Garden.
Mr. Toshifumi ITO, a Second Secretary in charge of culture and public relations, and Ms. Made Leene TRUU escorted the Ambassador.
“Embassy of the Plant Kingdom 2021” is the cultural project, initiated by the Tallinn Botanic Garden, which is celebrating its 60th Anniversary this year.
It called for the participation of the embassies stationing in Tallinn, and those embassies which responded, will host their cultural event one by one on a monthly basis.
Japan, as the first country, will host “Japan Day” on 29th of this month.
The opening ceremony started with hoisting of the flag of “Plant Kingdom”, a fictional country, at 2pm under such fair weather!
It was followed by a speech by the Foreign Minister Liimets.
She recalled her memory of the Tallinn Botanic Garden when she was a little girl, and said, “I look forward to seeing how various countries will introduce us the wealth of their culture and nature”.
The next speech was delivered by Ambassador KITAOKA, who said, “what makes botanic gardens so special is that they could teach us how interesting and even fascinating “being different” is, by introducing so many differences among the plants indigenous to different countries. Nowadays, “being different” comes to be scared and disliked, which has led to hate speeches or hate crimes. That is the reason why it is even more important now to learn “being different” is interesting and could be even fascinating. I would like to express my deep respect for the Tallinn Botanic Garden for taking such a splendid initiative”.
The ceremony was concluded by Ms. Urve Sinijärv, Director of Tallinn Botanic Garden, with a concluding speech, together with thanks to the Ambassador’s words.
It was followed by the Ambassador’s talk with the Foreign Minister, when the Ambassador presented her with the pin-badge commemorating the 100 years of friendship between Estonia and Japan, which was so kindly worn by her on that spot.
Then they moved for a photo session under a cherry tree, which has just started blooming on that day with such a coincidence and a good luck!
Then the Ambassador was interviewed by a television station, and explained the significance of “Embassy of the Plant Kingdom” and the importance of cherry trees for the Japanese people.
The Ambassador’s visit finished with a tour into the Botanic Garden guided by Mr. Urmas LAANSOO, Botanic Specialist.
The Ambassador was amazed that so many Japanese plants are nurtured in the Garden so well taken care of.
For the Ambassador, his participation in the opening ceremony this time proved to be very fruitful, to reconfirm the close Estonian-Japanese friendship, making him re-determined to promote it even further in future.
The Ambassador would like to express his sincerest gratitude to the Tallinn Botanic Garden for its thoughtful arrangement! 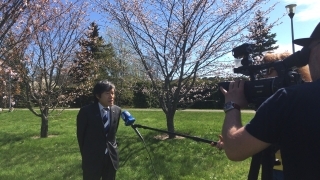 The Ambassador was interviewed by a television station 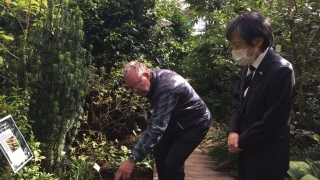 Many Japanese plants are nurtured in the Garden