Together with the representatives of Pernova Nature House 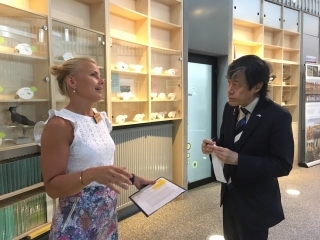 A guided tour inside the House
On 14th to 15th July, Ambassador KITAOKA made his 2nd official visit to Pärnu City!
He was accompanied by Mr. Toshifumi ITO, a Second Secretary in charge of culture and publicity.
Pärnu City is a known resort, nicknamed as “Summer Capital”, with many cultural facilities.
And the city is also very important from the viewpoint of the Estonian-Japanese friendship, since it has signed the cooperation agreement with a Japanese city, Ichikawa in Chiba Prefecture in October in the year before last.
This agreement has led to the visit by Prime Minister (at that time), H.E. Mr. Jüri RATAS to Ichikawa during his official stay in Japan in February last year.
Now, the city is in the midst of Summer Festival, which was initiated by Maestro Paavo JÄRVI, the chief conductor of Japanese NHK Symphony Orchestra, and the Ambassador’s visit this time has materialized by the city’s kind invitation to the Festival.

The Ambassador’s visit started with the visit to “Pernova Nature House”, which was founded in 1948.
He was greeted by Ms. Kadri REA, Educational Program Manager and Ms. Karin PUU, PR Manager, and a guided tour was conducted inside the House, which is not only equipped with many displays but also with a garden and a planetarium.
Ambassador highly praised the House, where the visitors can learn a lot about the nature, like animals, fish, plants, climate, geography and even planets, in very much a practical manner, by actually touching, seeing or feeling.


Ambassador said “I wish this House could be one of the places where Japanese pupils from Ichikawa city could get associated with Estonian pupils in the future”.
The visit finished with the photo session in very much a friendly manner.

Ambassador KITAOKA would like to express his sincerest gratitude to Ms. REA and Ms. PUU for welcoming him in such a warm manner, and to Mrs. Anu JUURMA-SAKS, the Head of PR of Pärnu City for her meticulous arrangements again following the Ambassador’s first visit last year!