Ambassador KITAOKA made his first visit to Pärnu City, the “Summer Capital”

Pärnu City is called “the Birth Place of the Republic of Estonia”, because the Estonian Independence was declared there in 1918.
This beautiful city is also a known resort, nicknamed as “Summer Capital”, with many cultural facilities.
And the city is also very important from the viewpoint of the Estonian-Japanese friendship, since it has signed the cooperation agreement with a Japanese city, Ichikawa in Chiba Prefecture in October last year.
This agreement has led to the visit by Prime Minister, H.E. Mr. Jüri RATAS to Ichikawa during his official stay in Japan in February this year.
That is exactly the reason why Ambassador KITAOKA has been so much anxious to visit Pärnu City as soon as possible after his arrival in Estonia, and it has materialized eventually! 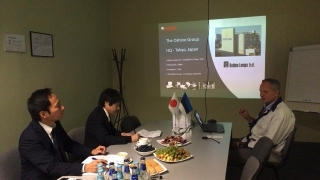 Tour of the factory working steadily in spite of COVID 19
Ambassador and his staff left Tallinn, the Capital City, early in the morning, and their visit to Pärnu City started at “Oshino Electronics Estonia OÜ”, which is one of the few Japanese companies running in Estonia.
Ambassador was welcomed by Mr. Ingvar KUUSK, CEO, who gave a briefing to the Ambassador, which was followed by the tour to the factory.
Ambassador was very much impressed by the factory, manufacturing variety of products, so wide ranging from automobile parts to vending machines of bus tickets, in “high mix, low volume” system, changing production lines in such a dexterous and efficient manner.
Ambassador celebrated the factory, working so steadily in spite of COVID 19 under the strong leadership of Mr. KUUSK.
Ambassador said “in order to make the Estonian-Japanese friendship long-lasting, the strengthening of business relationship is indispensable. “Oshino Electronics Estonia”, deep rooted in Pärnu City, has indeed so much importance for the future of the bilateral relationship”.

2nd Installment: Meeting and Lunch with the Mayor 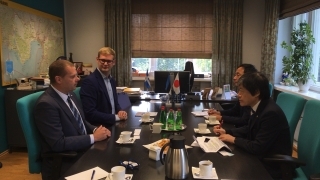 Meeting with the Mayor 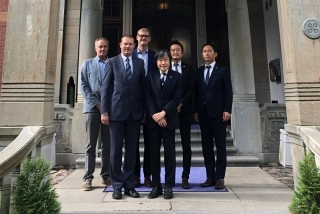 Together with the participants in the lunch
After visiting “Oshino Electronics Estonia OU”, Ambassador visited the Pärnu City Municipal Office, to have a meeting with Mr. Romek KOSENKRANIUS, the Mayor.
It was also attended by Mr. Rainer AAVIK, the Deputy Mayor, and Ms. Anu JUURMA-SAKS, the Head of Public Relations.
Ambassador conveyed the message of Mr. Hirotami MURAKOSHI, the Mayor of Ichikawa City in Chiba Prefecture, which signed the cooperation agreement with Pärnu City in October last year.
The message says “I sincerely would like to visit Pärnu City again once COVID 19 crisis is over. At the same time, I am so anxiously waiting for the visit of the Pärnu City delegation headed by Mr. KOSENKRANIUS. I shall continue to make my utmost efforts so that the cooperation between Pärnu and Ichikawa could play a leading role in the promotion of the Estonian-Japanese friendship, which is just attracting many people’s attention”.
The Mayor, Mr. KOSENKRANIUS asked Ambassador to convey his reply message to Mr. MURAKOSHI saying “ Mr. MURAKOSHI kindly paid a visit to Pärnu City last year. Therefore, we are so enthusiastic to visit Ichikawa City in return. In spite of COVID 19 crisis, we wish you the best of health and security to all the people in Ichikawa City”.
Ambassador promised to convey this message back to Ichikawa City.
Then the Mayor, Mr. KOSENKRANIUS told Ambassador that Prime Minister RATAS gave his report on his visit to Ichikawa City to the Mayor.

Then the participants moved to “Ammende Villa Restaurant”.
The lunch hosted by the Mayor was also attended by Mr. KUUSK, CEO of “Oshino Electronics Estonia OU”.
In the Restaurant, wearing the antique atmosphere, such a delicacy cooked by fresh Estonian materials, and rare wine made from the Estonian dandelion were served.
All the participants exchanged their views further to promote the Estonian-Japanese friendship by making the best use of the agreement between the two cities of Pärnu and Ichikawa. 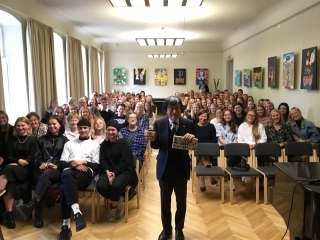 Together with the students after presentation 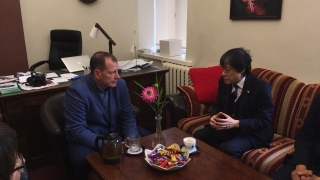 Meeting with the principal
Following the visit to “Oshino Electronics Estonia OU”, and the meeting and lunch with Mr. KOSENKRANIUS, the Mayor, the Ambassador visited Sütevaka Gymnasium.
He was welcomed by Mr. Andres LAANEMETS, the Principal, Ms. Heidi TAAL, the Recreation Program Leader, and Ms. Ineta PUIDET, an English teacher.
It was followed by the Ambassador’s power point presentation entitled “What is Japan? Island Country, so mysterious”, which was attended by about 100 students of the Gymnasium.
After the presentation, students asked the Ambassador many questions in such a lively manner with very fluent English, which pleased the Ambassador a lot!
Then, the Ambassador had a meeting with the Principal on various subjects including the possibility of exchanges between the Gymnasium and a Japanese school.
Following the meeting, Ms. PUIDET took the Ambassador to a tour of the Gymnasium’s building, which is a unique combination of a historical building with a modern one.
Eventually the Ambassador left the Gymnasium saying “I sincerely wish that exchanges between the students of this Gymnasium and a Japanese school could materialize in future”.

Final Installment: Visit to the Museum of New Art 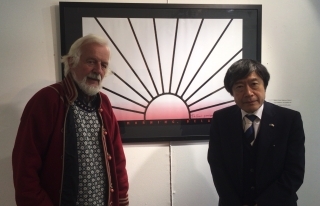 Together with the Artistic director and Main curator 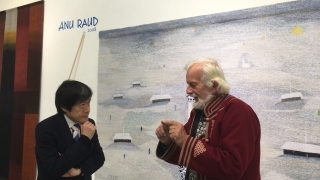 In front of a masterpiece by Ms. Anu RAUD
Following the visit to “Oshino Electronics Estonia OU”, the meeting and lunch with Mr. KOSENKRANIUS, the Mayor, and the visit to Sütevaka Gymnasium, the Ambassador’s final visit took place at the Museum of New Art.

The Ambassador was welcomed by Mr. Mark SOOSAAR, the Artistic Director and Main Curator, and his daughter, Ms. Marie Virta-Soosaar, who has supported her father for such a long time, contributing a lot to expand the activities of the Museum.
Actually, in September last year at this Museum, an exhibition of Japanese constructions entitled “Struggling Cities” was opened with a tape cut by the Mayor and Mr. Hajime MATSUMURA, the Counsellor of the Japanese Embassy.
The Ambassador, guided by Mr. and Ms. SOOSAAR, made a tour around the Museum, which started with the opening exhibition to support the democracy in Belarus, followed by the precious exhibition of the Estonian traditional textile arts.
It was a pleasant surprise for the Ambassador to make a reunion with a tapestry “Tartu Peace 2020”, a masterpiece by Ms. Anu RAUD, Professor Emeritus of the Estonian Academy, whose works are favorites of the Ambassador and his wife!(see our HP and FB dated on 2nd February).
Indeed, the visit to this Museum turned out to be such a beautiful conclusion of the Ambassador’s first visit to Pärnu City.