On 16th December, Ambassador Kitaoka invited members of “Estonia-Japan Parliamentary Friendship Group”, which is chaired by Mr. Kaido Höövelson, who once showed wonderful performance in Japanese sumo wrestling as “Baruto”.
The members, who attended this time are the honorable parliamentarians, Mr.Höövelson, Mr. Kalev Kallo, Mr. Jüri Jaanson, Ms. Maria Jufereva-Skuratovski, and Ms. Eva Valius, who is the secretary of the Group.
From the Japanese Embassy, Mr. Matsumura, the Counsellor, and Secretaries of the Embassy, Mr. Yoshimura, Mr. Shigenari, and Mr. Ito attended.
Prior to the meeting, Ambassador Kitaoka made a power point presentation entitled “Japan and the Emperor”.
It was followed by the exchanges of opinions on how to promote the Estonia-Japan friendship further, while enjoying the Japanese dishes cooked by Mr. Takaaki Arai, the official chef of the Ambassador. 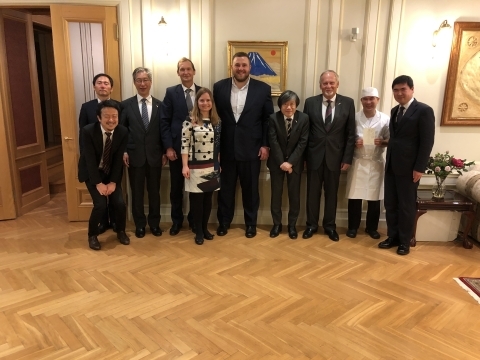