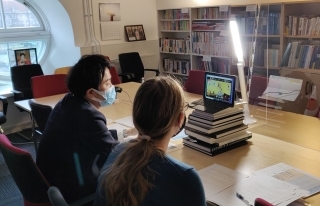 A monitor space for moderator Title of the online lecture
On November 5, in commemoration of the 100th anniversary of Estonia-Japan friendship, the Embassy invited Ms. Yukiko Takahashi from “Takahashi Kobo (studio)” as a lecturer and held the FY2021 Japan Brand Program "Welcome to the long standing world of Edo woodblock prints” online in cooperation with the Estonian Academy of Arts.
Ms. Takahashi has been contributing to the development and promotion of Edo woodblock print culture while focusing on training artisans in Japan and giving lectures around the world as the sixth generation of a 160-year-old Ukiyo-e printing studio.

After the moderator, Mr. Ito, Second Secretary of the Embassy touched upon the significance of this online lecture and gave an overview of Ukiyo-e, Ms. Takahashi led a virtual tour of the Takahashi Kobo and gave a lecture on the craftsmanship, works and tools for Ukiyo-e. The virtual tour was followed by a Q&A session.
We hope that the participants were able to make new discoveries and gain inspiration through this online lecture on Ukiyo-e, which has been said to be nurtured by the culture of the townspeople in the Edo period and have influenced many artists all over the world. 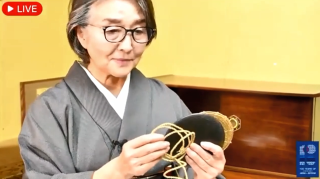 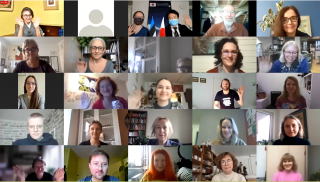