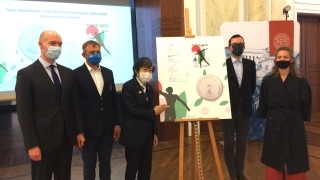 With the memorial board signed by the participants Speech delivered by the Ambassador
On 26th May, Ambassador KITAOKA, with the kind invitation of Mr. Madis MÜLLER, the honorable Governor of the Eesti Pank, attended the “Press Presentation of the coin & postage stamp for the Tokyo Olympics” to deliver a speech.
Mr. Toshifumi ITO, a Second Secretary in charge of culture and public relations, and Ms. Made Leene TRUU escorted the Ambassador.
The ceremony took place at “Independence Hall” of the Eesti Pank, and was opened by the speech delivered by the Governor.
He said in his speech “the Olympics this time is different from the others, because of the Covid-19. However, by holding big events like the Olympics, we can strengthen the unity of people more than ever”.
It was followed by the remarks by Mr. Urmas SÕÕRUMAA, the honorable President of the Estonian Olympic Committee, congratulating the presentation of the memorial coin and the stamp.
Then Ambassador KITAOKA said in his speech “thanks to the talented two Estonian designers, the memorial coin and the stamp were presented with the design, based on the profound understanding of Japan and the Japanese culture. I am very much pleased! In order to make a success in the Olympics, the unity among peoples and countries is indispensable, and Estonia has demonstrated her unity with Japan by the coin and the stamp. And as for Japan, a Japanese city Saku, which is the sister city of Estonian Saku, is the host-town, which is waiting so anxiously for the arrival of the Estonian athletes with meticulous arrangements. This is the unity, which Japan is demonstrating to Estonia. I think it is wonderful that our two countries are mutually demonstrating the unity for the Olympics”.
Eventually, signing on the board with the pictures of the coin and the stamp by the participants took place, and this board was presented to the Ambassador together with the coin and the stamp.
The ceremony finished with a photo session.
Thereafter, the Ambassador was interviewed by the Estonian news agency “Delfi”, and talked on the Olympics under Covid-19 or the cooperation between Estonia and Japan.
Finally, the Ambassador talked with two Estonian designers, Mr. Ander AVITA and Ms. Triin HEIMANN, who appeared wearing “kimono”, and highly praised their design, which is inspired by Japan, like its minimalism, Mt. Fuji, recycling and so on!