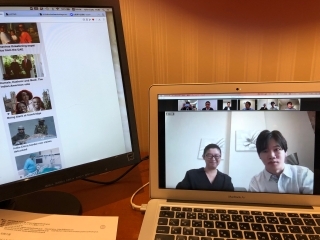 Participants from Next innovation 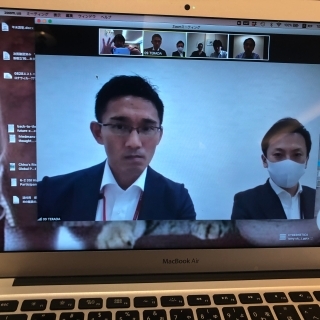 Participants from Kyuden Business Front
On 7th October, Ambassador KITAOKA, in the resurging of COVID-19, attended a meeting, which is connecting Estonia and Japan, and attended by each participant separately through internet by web-conference system.
From the Japanese Embassy, Mr. Tomoya SHIGENARI, a Second Secretary in charge of economic affairs also attended.

The meeting was also attended by Mr. Kojin KUMAGAI, COO of a venture trading company, “Next innovation”, which is his start-up in Estonia, and Ms. Mayumi INA, CEO of the company, attended.
From “Kyuden Business Front”, which is cooperating with “Next innovation” to vitalize Kyushu Area referring to Estonia, Mr. Takakazu TERADA, Director of IntraLINK Innovation Division and Mr. Hirotaka KURATANI of the same Division attended.
And Mr. Yuki MORIOKA, Executive Director of Incorporated Association “Heart Rich” also attended.

Mr. TERADA made a power point presentation to introduce “KYUDEN i-PROJECT” to vitalize Kyushu Area, which is facing the decline of population and the ageing of society in medium and long term.
He explained that this Project is supporting the Japanese, who wish to study business in Estonia.
It was followed by Mr. KUMAGAI’s introduction on the progress of on-going projects to hold seminars and to promote the sales of the Estonian products to Japanese market.

Ambassador praised “Kyuden Business Front” for focusing on Estonia, which has been successfully promoting its efficiency by making the best use of digital technology, that has eventually led to the promotion of its profile, far overcoming its small size of 1.3 million population.
Ambassador also highly praised Mr. KUMAGAI for his entrepreneurship, saying “not only in Estonia, where start-ups are one of the most frequent in the world, but also in Japan, more entrepreneur like Mr. KUMAGAI should emerge. That is my heartfelt wish”.

Finally, all the participants promised to make a reunion in Estonia in a “face-to-face” manner, when COVID-19 situation improves.
Until that time, Ambassador wishes all of you to take very good care of yourself. 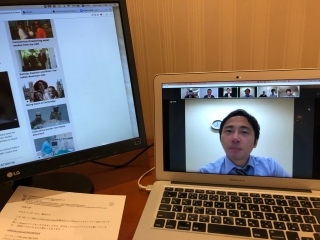 Mr. Shigenari from the embassy