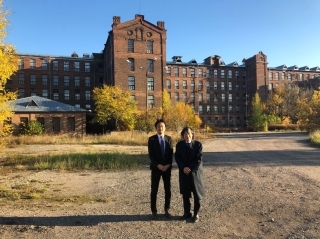 The historic building of Kreenholm Textile Factory boasted itself as the biggest in Russian Empire
On 4th October, Ambassador Hajime KITAOKA made his 1st official visit to Narva City, bordering Russia.
He was escorted by Mr. Toshifumi ITO, a Second Secretary in charge of culture and public relations in the Japanese Embassy.

After his visit to “OBJEKT”, the Ambassador was guided by Ms. Victoria PUNGA, in charge of foreign relations in the City Office, to the historic building of Kreenholm Textile Factory.
Constructed in 19th century, this factory boasted itself as the biggest in Russian Empire.
During the Soviet period, it employed as many as 14,000 workers, who were manufacturing a large amount of linen and cotton.
The precinct of the factory was also equipped with a kindergarten, a library and a hospital, making the factory as if it were a community.
Proceeding into the precinct by car, gigantic ruins of the factory emerged ahead in the twilight, which reminded the Ambassador of the Soviet Union.
In the previous destination, “OBJEKT”, more and more startups are materializing, which is Narva City now.
But it has a history like Kreenholm.

The Ambassador’s one-day visit was short, but still Narva City showed him so many different faces!
With this visit to Kreenholm, the Ambassador’s 1st official visit to Narva City was completed, and he, together with Mr. ITO, left the City at dusk, back to Tallinn, the Capital City.
Ambassador KITAOKA would like to express his sincerest gratitude to Ms. PUNGA for arranging such a fruitful schedule, and spending a whole day to accompany him!