2021/10/4
On 4th October, Ambassador Hajime KITAOKA made his 1st official visit to Narva City, bordering Russia.
He was escorted by Mr. Toshifumi ITO, a Second Secretary in charge of culture and public relations in the Japanese Embassy.

After his lecture at the Language Lyceum, Ambassador visited “OBJEKT”, which is the 1st Incubator in Baltic Countries.
Managed by “Narva Creative Incubator Foundation (Sihtasutus Narva Loomeinkubaator)”, which was set up in 2016, “OBJEKT” has been providing startups, middle and small sized enterprises, and creative businesses with co-working spaces.
The opening ceremony of “OBJEKT” in October 2019 was attended by President KALJULAID.
The Ambassador was welcomed by the co-founders, Mr. Anton OSSIPOVSKI and Ms. Jana BUDKOVSKAJA (with internet connection).
The visit started with a guided tour into the facility.
For the Ambassador, the most modern equipment for the film shooting and editing, enabling multi-media presentation, and the huge exhibition space were particularly impressive.
By using this incubator, run by the enthusiastic youngsters, enthusiastic young entrepreneurs are materializing more and more startups!
Even during the Ambassador’s visit, he could see youngsters making lively discussions here and there in the incubator.
This incubator, full of enterprising spirit of the young, has made the Ambassador feel envious, comparing it with Japan, where still the culture of startups has not been promoted well.
The Ambassador’s question, “why startups are not popular in Japan?”, was so well answered by Mr. Alex BITSKOV, who lived in Japan for 4 years teaching English language.
He answered “Japanese culture is different. In Japan, pupils are educated never to make mistakes so that they could get good marks in examinations. In those circumstances, the startup culture could never be nurtured. To make mistakes are so important, because they are the first step towards the innovation”.
His remarks impressed the Ambassador in such a serious manner.
The visit this time gave the Ambassador a precious occasion to get a glimpse of the secret of Estonia, where the percentage of startups is one of the highest among the developing countries.!
He would like to express his sincerest gratitude to “OBJEKT”, headed by Mr. OSSIPOVSKI, for accepting the Ambassador and Mr. ITO in such a cordial manner under COVID19! 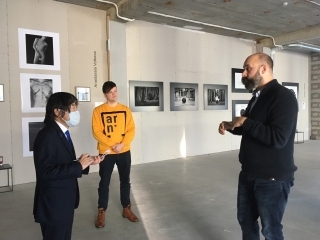 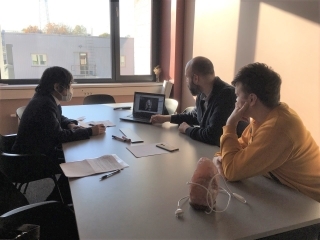 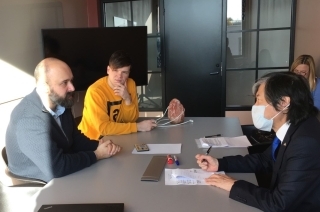 Exchange of views on Startups 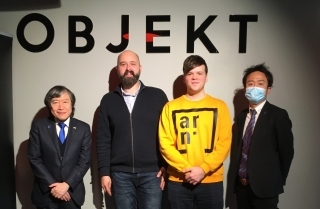 Together with the members of OBJEKTI