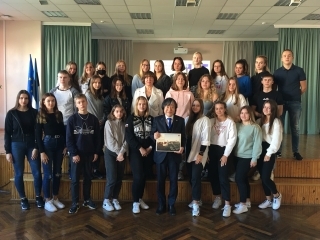 Together with the students 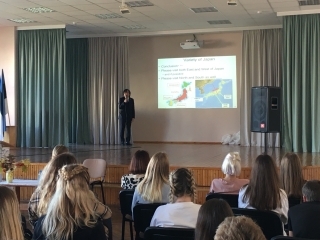 A lecture by the Ambassador
On 4th October, Ambassador Hajime KITAOKA made his 1st official visit to Narva City, bordering Russia.
He was escorted by Mr. Toshifumi ITO, a Second Secretary in charge of culture and public relations in the Japanese Embassy.

After attending the luncheon, the Ambassador moved to Narva Language Lyceum to give a lecture to introduce Japan to its students, entitled “Japan, Island Country, which is so mysterious”.
The Ambassador was welcomed by Ms. Nadezda TSERUKASINA, the head of the Lyceum, and was ushered into the big hall, where 50 students were anxiously waiting.
In his lecture, the Ambassador said “the common knowledge says that Japan is a homogeneous country. On the contrary, Japan is full of varieties, because of its geography, where the nation is divided by so many rivers and mountains. If you have a chance to visit Japan, please try to visit as many different places as possible to feel this variety”.
The Ambassador further discussed that Japan has been suffering the decline of its population, its economy has been sluggish, which makes its digitization more and more important and urgent to overcome those problems.
He concluded his lecture, stressing the importance for Japan to learn a lot more from Estonia, the most digitized country.
The Ambassador was so much impressed by the students, who paid a lot of attention to him together with their question posed to him in such good English!
He would like to express his sincerest gratitude to the Lyceum, headed by Ms. TSERUKASINA, who so kindly arranged his lecture under COVID19, and to all the students who listened to him so attentively!