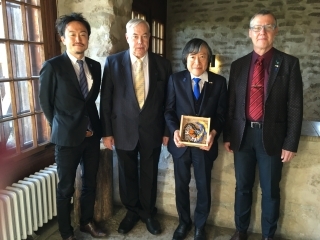 Together with the Mayor and the Vice Chairman with badges 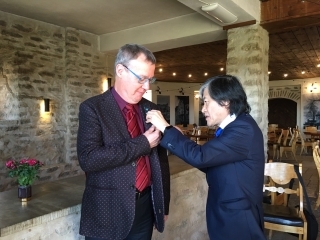 Presentation of the badge to mark the 100 years of friendship
On 4th October, Ambassador Hajime KITAOKA made his 1st official visit to Narva City, bordering Russia.
He was escorted by Mr. Toshifumi ITO, a Second Secretary in charge of culture and public relations in the Japanese Embassy.

After the reunion with the President KALJULAID, and a guided tour around Narva City, Ambassador KITAOKA participated in the luncheon hosted by Mr. Ants LIIMETS, Mayor of the City.
It was also attended by Mr. Tarmo TAMMISTE, Vice Chairman of the City Council, Ms. Victoria PUNGA, in charge of foreign relations in the City Office, who made all the arrangements for this visit, and Mr. ITO.
Local duck and a dessert made from chia seeds were very fresh even for the Ambassador, who have got accustomed to the delicacy of Estonian restaurants, and he thoroughly enjoyed them!
Over the lunch, wide-ranged subjects were discussed.
The unity of Narva City, overcoming the complicated relationship between the historic Narva, which was lived by many Estonians, and the present Narva, where 85% of population is Russian speaking, through various cultural events, was introduced.
The sentiment of those Russian speaking citizens for Russia, located just next to them over the border, the prospect of the local election coming on 17th  October, the possibility of the Narva City to cooperate with a Japanese municipality, were also discussed, which turned out to be very precious for the Ambassador!
Finally, a blue colored necktie and the symbol of the Narva City were presented to the Ambassador, to which he returned with presenting the badges to commemorate the 100 years anniversary of the Estonia-Japan friendship.
The photo session followed with the Ambassador putting on the blue tie, together with the Mayor and the Vice Chairman putting on the badges, which ended the luncheon in such a friendly manner!
The Ambassador would like to express his sincerest gratitude to the Mayor for hosting such a fruitful lunch, when he was so busy with the coming election!