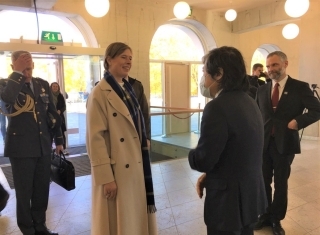 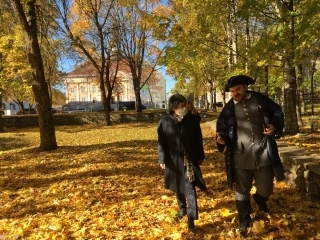 The Ambassador listened with great interest to the history of Narva City
On 4th October, Ambassador Hajime KITAOKA made his 1st official visit to Narva City, bordering Russia.
He was escorted by Mr. Toshifumi ITO, a Second Secretary in charge of culture and public relations in the Japanese Embassy.
The Ambassador, who left Tallinn, the Capital City in the early morning, headed for the east to arrive at Narva City in 2 hours and 40 minutes.
Ambassador was welcomed by Ms. Victoria PUNGA, in charge of foreign relations in the City Office, who once worked for the Protocol Department of the Foreign Ministry, at the front gate of the Narva College of Tartu University.
Surprising news was brought by her to the Ambassador that President KALJULAID, who is finishing her Presidential term next week, is arriving here quite soon to start her final tour around Estonia!
For the Ambassador, this reunion with the President comes after the last meeting on 26th January, when she so kindly got the Japanese national flag hoisted in the front yard of the Presidential Palace to commemorate the 100 years of friendship between Estonia and Japan.
It was the Ambassador’s sincere wish to see the President again before her departure, since she has been so pro-Japanese, and always taken care of the Estonian relationship with Japan so well.
Therefore, this unexpected reunion in Narva City has come to be a truly wonderful moment for the Ambassador!
The reunion took place at the entrance hall of the College, where the Ambassador expressed his sincerest gratitude to the President for her visit to Japan in August for the Tokyo Olympic Games.
The President said that she wishes for the Ambassador’s 1st official visit to Narva City could be a fruitful one.
Thereafter, a guided tour followed, conducted by Mr. Dennis BJORKLAND, a guide known as the most knowledgeable on the history of Narva City, who dressed himself with a historic costume!
The Ambassador listened with great interest to the history of Narva City, which lost so many buildings by the bombings of the Soviet Union, and still has been trying so hard to preserve the historic buildings left.
Then the Ambassador enjoyed the scenery of two castles, the Narva Castle and the Ivangorod Castle, facing each other across the Narva River, the former on the Estonian side, and the latter on the Russian side.
This scenery, which Mr. Lauri VAHTRE, a known historian, referred to “Two Towers”, depicted in “The Lord of the Rings” by J.R.R. TOLKIEN, was overwhelmingly magnificent for the Ambassador!