Ambassador KITAOKA visited Muuga Harbor, which is to be the terminal port of “Rail Baltica” 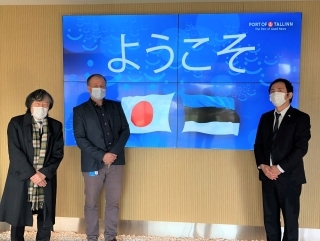 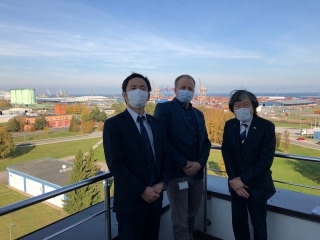 Muuga Harbor, opened in 1986
On 8th October, Ambassador Hajime KITAOKA visited Muuga Harbor, the biggest cargo port in Estonia, which is to be the terminal port of “Rail Baltica”, a grand railway project across the three Baltic countries, which are to be connected eventually to Poland (scheduled to be completed in 2030).
He was escorted by Mr. Tomoya SHIGENARI, a Second Secretary in charge of economic affairs in the Japanese Embassy.
The Ambassador arrived by car at the administration office of the Harbor, which is located at 17km north east of Tallinn, the Capital City, to be welcomed by Mr. Janek TOIGER, General Manager.
At the entrance, a panel is displayed saying “yokoso (welcome in Japanese)” together with the flags of Estonia and Japan, which pleased the Ambassador a lot!
His visit started with the briefing given by Mr. TOIGER at his office.
Muuga Harbor, opened in 1986, is boasting of its maximum water depth of 18m, which can accommodate very large vessels, and many ROLL-ON/ROLL-OFF ships are coming in and out.
The Harbor has got another advantage of almost non-frozen during the winter time.
Here, in this Harbor, now the project to construct the terminal is about to start, to prepare for the completion of “Rail Baltica”.
Another big project of constructing LNG base is on schedule.
This must make this Harbor, which Estonia is so much proud of, even more promising for the further development in future!
This is the message, which the Ambassador received from Mr. TOIGER’s briefing.
It is followed by the guided tour deep into the facilities of the Harbor with a car driven by Mr. TOIGER.
The view of many warehouses owned by companies using this Harbor, storing various cargoes was so impressive.

Tallinn was once at the top of its prosperity as one of the central cities of “Hanseatic League”.
This visit gave the Ambassador a precious occasion to make him understand that Tallinn is still firmly supported by its trade, going into, and coming from the sea.
The Ambassador would like to express his sincerest gratitude to Mr. TOIGER for accepting him in such a cordial manner under COVID19!