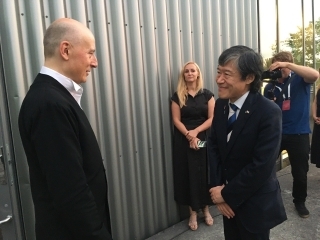 The reunion with Maestro JÄRVI 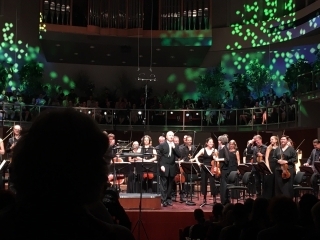 Estonian Festival Orchestra
On 14th to 15th July, Ambassador KITAOKA made his 2nd official visit to Pärnu City!
He was accompanied by Mr. Toshifumi ITO, a Second Secretary in charge of culture and publicity.
Now, the city is in the midst of Summer Festival, which was initiated by Maestro Paavo JÄRVI, the chief conductor of Japanese NHK Symphony Orchestra, and the Ambassador’s visit this time has materialized by the city’s kind invitation to the Festival.

The Ambassador, following the dinner hosted by Mr. KOROBEINIK, the Chairman of the City Council, and his wife, moved to Pärnu Concert Hall to enjoy the 4th day of the Pärnu Music Festival.
The Estonian Festival Orchestra is organized only for the Festival by the world top-class orchestra players, gathering together responding to the invitation by Maestro JÄRVI.
Despite such a short period for rehearsal, the Orchestra astonished the Ambassador with its complete integrity, created by the dexterous conducting by Maestro.
The concert program comprises the first half, Piano Concerto No.24 by Mozart, and the second half, ballet suite ”Goblin (Kratt)” by Eduard Tubin, an Estonian composer.
The Concerto No.24, which was, as Mozart’s piano concerto, unusually composed in minor, impressed the audience so deeply with solo by a German pianist and composer, Mr. Lars Vogt.
”Goblin (Kratt)”is based on Kratt, a magical creature appearing in an Estonian folklore.
The Kratt, which is given life by the devil, usually follows the master’s order, but sometimes commits something dangerous, making him troublesome and humorous at the same time.
Such an atmosphere, worn by Kratt, was depicted so vividly by dexterous conducting by Maestro JÄRVI.
The concert, together with two encore pieces, finished in very much a lively manner by standing ovation.
The Ambassador has already met the Maestro in February last year on the occasion of NHK Symphony Orchestra’s performance in Tallinn, so they have made the reunion.
After the concert, the Ambassador was invited to the Maestro’s favorite bar, where he had a memorable time with the members of the Festival Orchestra.

Ambassador KITAOKA would like to express his sincerest gratitude to Pärnu City for its kind invitation to the Festival, and to Maestro Paavo JÄRVI!