Ambassador KITAOKA had a meeting with Ms. TOKITOMO, who has come to Estonia to hold KIMONO exhibition 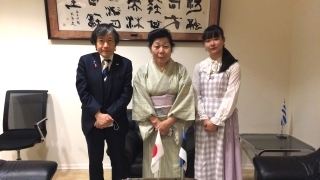 Together with Ms. TOKITOMO and Ms. YUKI 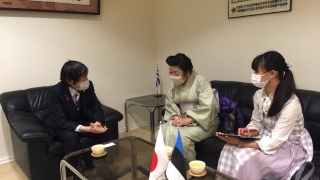 Meeting on dyeing and KIMONO
On 4th June, Ambassador KITAOKA had a meeting with Ms. Hisako TOKITOMO, who has just come to Estonia to hold KIMONO exhibition, at the Ambassador’s office in the Japanese Embassy.
The meeting was also attended by Ms. Eriko YUKI, the assistant to Ms. TOKITOMO, and Mr. Toshifumi ITO, a Second Secretary in charge of culture and public relations.

The exhibition “KIMONO - The Essence of Japanese Beauty” will take place at the Adamson-Eric Museum located at the Old Town in Tallinn, the Capital City, from 10th June to 21st November.
The opening ceremony will be held at 4pm on 10th June at the Museum.
Together with Ms. TOKITOMO, Ms. Naomi TOSHISHIGE, tea ceremony master is coming to Estonia, and the Dyeing and Tea Ceremony workshop for students is planned to be held on 8th June by Ms. TOKITOMO, Ms. TOSHISHIGE together with Ms. YUKI.

Ms. TOKITOMO has been working to bridge between Estonia and Japan by her visits to Estonia, holding cultural events like workshops to introduce traditional Japanese dyeing method.
At her meeting with the Ambassador, she told her encounters with dyeing or KIMONO, the beauty of vegetable dyeing, and its popularity among the Estonians.
The Ambassador responded “the Estonians are so much attached to nature, which must make them deeply sympathetic with vegetable dyeing”.

Those who are interested in the beautiful KIMONO and OBI (sash for KIMONO) are invited to visit the Adamson-Eric Museum during the KIMONO exhibition.
Ambassador KITAOKA will attend the opening ceremony to deliver a speech.

The Ambassador would like to express his most sincere gratitude to Ms. TOKITOMO, Ms. TOSHISHIGE and Ms. YUKI for their visit to promote the Estonian Japanese friendship further under COVID19!