Ambassador had a meeting with Ms. Kaire Jürgenson, Spouse of the Estonian Ambassador in Tokyo

Together with Ms. Kaire Jürgenson 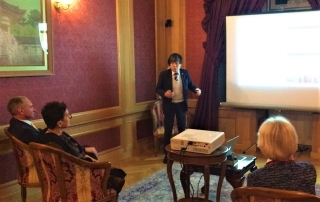 The meeting was attended by Ms. Kersti Tiik, the Director of Development of the Art Museum of Estonia, and Mr. Einar Ellermaa, the Editor of “Eesti Ekspress”, who is just publishing the biography of Mr. Kaido Höövelson, widely known as “Baruto”. From the Japanese Embassy, Mr. Toshifumi Ito, a Second Secretary, attended the meeting.

Before the meeting, Ambassador Kitaoka made a presentation entitled “Japan and Emperor”.

It was followed by the exchange of views on how to promote the existing Estonian-Japanese friendship further.