​Ambassador KITAOKA invited a world-famous pianist, Mr. TATENO Izumi, and his wife to the residence 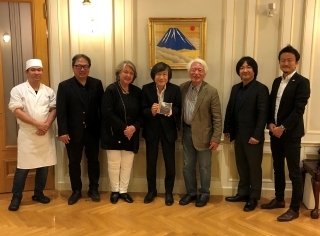 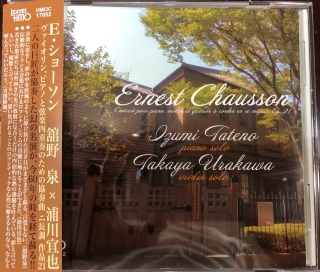 CD recorded 69 years ago
On 3rd August, Ambassador KITAOKA invited a world-famous pianist, Mr. TATENO Izumi, and his wife Marja to the residence and enjoyed talking with them over dinner.
Mr. TATENO, who is 83 years old, is still very active in playing at concerts, based both in Finland and Japan.
He has made annual summer visits to Estonia to have recitals at “Eivere Piano Festival”.
This year the Festival was unfortunately cancelled due to COVID 19, he still visited Estonia for the recording of his piano playing.

The dinner was also attended by Mr. OGAWA Hideki, who is the owner of “Eivere Manor House”, where the Festival takes place, and Mr. KURAHASHI Ryosuke, who studied conducting choir at the Estonian Academy of Music and Theatre.
From the Embassy, Mr. Ito, a Second Secretary in charge of culture and public relations attended.

All the participants took their seats keeping enough distance from each other in the dining hall of the Ambassador’s residence, fully ventilated.
While enjoying Japanese cuisine, cooked by Mr. ARAI Takaaki, the official chef of the Ambassador, the participants were impressed by Mr. TATENO, talking on his deep affection to music, on comparison between Estonia and Finland, and so on.

Mr. TATENO gifted the Ambassador a very precious CD, recording Mr. TATENO’s piano playing 60 years ago, when he was still a university student.
Actually, Ambassador KITAOKA once worked for the Japanese Embassy in Finland, and had a chance to meet Mr. TATENO at that time.
25 years have passed since then, and eventually the reunion materialized, which has come to be a very impressive moment for the Ambassador!